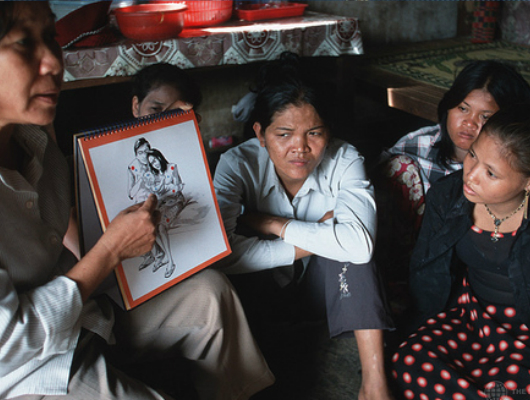 Access to sex education is not readily available in developing countries. Even more prevalent is the lack of access for younger people. Consequently, they do not receive information that could keep them safe.

Now, a new initiative is changing that.

Text messaging has remained a popular way for young people in Cambodia to communicate. According to a 2014 study conducted by BBC Media Action, 96 percent of Cambodian youth have access to a cellular device. Of that amount, 30 percent use text messaging.

“Youngsters using the service will be able to communicate on a level they are used to and comfortable with,” says Sanary Kaing, OneWorld’s project officer.

Before the service was launched, many young people felt uncomfortable talking about sex education. The absence of knowledge prevented people from educating themselves about ways to keep each other safe, resulting in pregnancy, STDs and unsafe abortions.

“Very few parents discuss sexual and reproductive health with their children, and teachers are also very hesitant to discuss issues related to sexuality, even though they are incorporated into the school curriculum,” says Jeffery Allen, global programme coordinator for OneWorld U.K., one of the three NGOs running the pioneering project.

Women, in particular, felt uncomfortable bringing up the topic.

“Many women do not feel safe or comfortable accessing sexual and reproductive health information and services at public health facilities because they are afraid of what family and community members will think or say about them,” Allen adds.

OneWorld not only relies on the fact that many teenagers have cell phones. It also owes its success to the projects anonymity.

“It is a great opportunity for teenagers to access accurate, non-judgmental and confidential information and counseling,” Allen says.

OneWorld hopes that the service will continue to spark conversations about sex. While it is still too early to assess the success of the program, Allen says that a similar project garners between 250 and 1,000 messages a day.