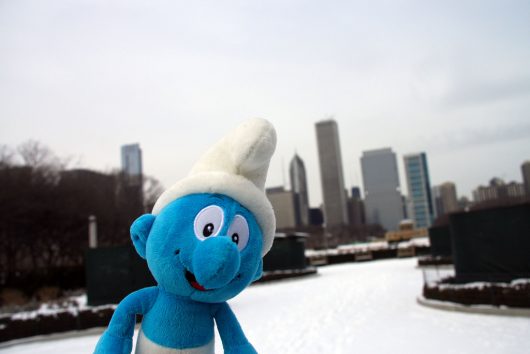 “Smurfs: The Lost Village” and the U.N. are working together on the Small Smurfs, Big Goals campaign. The campaign aims to promote the United Nation’s Sustainable Development Goals for 2030. The International Day of Happiness, which the U.N. has celebrated since 2013 on March 20, was central to this campaign.

Demi Lovato, Joe Manganeilio and Mandy Patinkin, three of the main voice actors from the “Smurfs: The Lost Village” movie, came to the International Model U.N. Conference to honor a few students for their projects to help achieve the Sustainable Development Goals (SDGs).

Patinkin, who plays Papa Smurf in the film, congratulated the students at the conference.

“On behalf of all Smurfdom,” he said, “thank you for your work in awakening everything, in your community, through your social media, all over the world, in the ways that you have chosen to encourage people everywhere to make this world a better place for those who are so vulnerable in every way imaginable.”

Each of the students received a symbolic key to Smurf Village.

The visit to the International Model U.N. Conference was one way the Small Smurfs, Big Goals campaign honored the International Day of Happiness and the SDGs. On March 20, the Smurf cast and the U.N. lit the Empire State building blue.

On the Small Smurfs, Big Goals website, visitors can take a quiz to find which Smurf they are most like based on the issues they care about. Then, they can share their smurfs and support or learn more about what they can do to support these issues.

The campaign also has a lesson plan for elementary school teachers to use “Smurfs: Lost Village” to teach children about SDGs.

World leaders in September 2015 adopted the SDGs for 2030 and implemented them in January 2016. The SDGs build on the Millennium Development Goals (MDGs.) The goals focus on education, equality, access to jobs and other key issues.