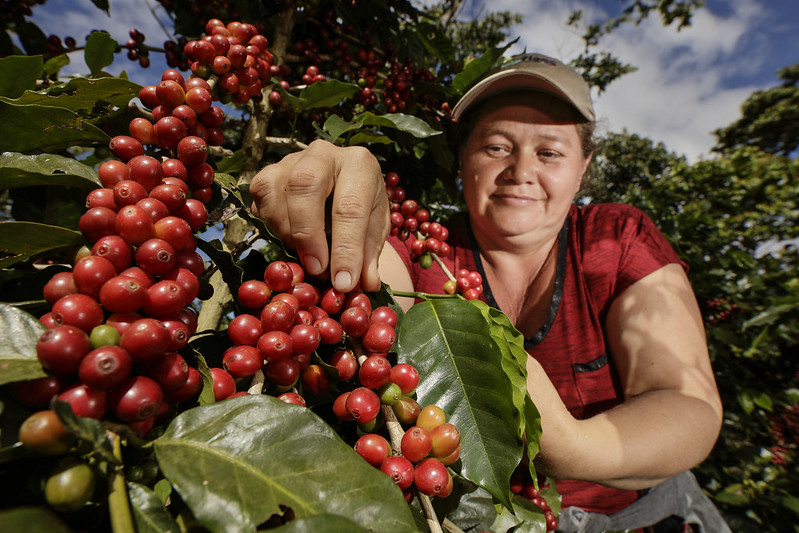 In 2015, there were 783 million people living in poverty. Although there has been some progress in reducing this number in the past few years, poverty continues to be a serious issue. Fairtrade is one simple yet impactful approach to alleviate this problem. The purchase of fair trade products supports gender equality, children’s and workers’ rights, and sustainable farming. Unfortunately, consumers are often unaware of the availability of fair trade products. This is mainly because they haven’t been generally accessible. The fair trade market is showing signs of growth, however, and the purchase of fair trade products can become a key to promote the reduction of poverty.

Starbucks, one of the most popular coffee companies in the world, has been promoting fairtrade globally since 2000. The company is attempting to improve the lives of more than 1 million people who live in communities that revolve around the coffee industry. Toward that end, Starbucks now purchases 99 percent ethically grown coffee through Conservation International and has committed to 100 percent by 2020. The company has also launched a Global Farmer Fund Program which is committing $50 million to finance the renovation of coffee farms.

The goal is to develop more sustainable farming practices with improved employment conditions. More than 29,000 Starbucks stores around the world are having a substantial impact.

The fashion industry is often guilty of using problematic and unethical labor practices, particularly child labor. This is because the industry embeds children in the supply chain to handle low-skilled tasks such as cotton-picking for extremely low wages. For this reason, it is very difficult to pay fair wages and still compete in the industry. Nevertheless, some fair trade products are starting to become competitive.

Athleta and Aventura are two companies that are offering sustainable fair trade clothing. Athleta is an activewear brand that has created more than 40 fair trade styles. They have committed to creating up to 230 by the end of the year.

Aventura sells fashionable, everyday clothing items for women and men that are made using fair trade practices. They use low-impact, sustainable materials for over 75 percent of their styles. The company also partners with Fair Trade USA to give back to the workers who produce their clothing. These fair trade companies provide good alternatives to clothing from brands like Urban Outfitters or Free People.

Lush is making the acquisition of ethically produced cosmetic products easier. Organizations like Fairtrade International have fair trade certified many Lush products. In some cases where ingredients have not been fair trade certified, Lush forms a direct relationship with the supplier to ensure that workers are treated and paid fairly. Lush also supports sustainable practices by its suppliers. Consumers are supporting improved working conditions in the cosmetics industry by purchasing products from Lush.

For the Occasional Sweet Tooth

Tony’s works with 5,021 farmers and is committed to providing all of them with a living wage. The company pays its farmers a Fairtrade premium as well as their own premium. With this structure, the farmers get more than 9.6 percent of the retail price. Grocery stores throughout West Africa are making Tony’s chocolate bars easily accessible.

And So Much More…

Fairtrade shopping is one of the simplest yet most impactful ways to benefit the world’s poor. Fortunately, quality fair trade products are becoming easier to find than people might assume. Organizations like Fairtrade America and Fair Trade Certified have validated many ethical companies. It is important to seek out and support companies that sell fair trade products because purchasing fair trade products is a great alternative that facilitates poverty reduction.

The pressure is on for North Korea to surpass previous years of famine and intolerably high death tolls, possibly nearing hundreds of thousands lives lost. The threat of famine imminent throughout the nation, Kim Jong Un proclaimed a prosperous farming season, claiming North Koreans will, “never have to tighten its belt again,” with the hopes of inspiring farmers to excel.

The question still lies in every mind, how can an isolated, autocratic state find success when they refuse aid from every inquiry that comes their way? Compared to last year, North Korea is expected to produce three million tons less grains, paving the way for a lower crop season overall.

North Korea, no matter how hidden and secretive they attempt to be, still releases information to the world, even though it may be altered. Kim believes that his country can provide for itself and be a successful self-sustainable farming example. In reality, farmers struggle to get past the memories of the death and hunger that rampaged through the country in the 1990s.

In that time, farming was made up of innovative farming technology that quickly lead to the fuel and equipment shortages that created long-term damage. The policies put in place at the time did not account for over usage, allowing farmers to abuse the system and ultimately plow themselves into the ground, hungry and poor.

There are some instances in North Korea that point to signs of smart farming and success, given the example of Rim Ok Hua, whose farm received special recognition from the late leader, Kim Jong Il. This acknowledgement has gifted Rim’s farm with access to the top tier materials to maintain a vast and growing farm. Rim is one of few farmers that do not worry about their own lives when the farming season comes, compared to poorer provinces where farmers dread the harvests.

Forced to do so by hand and alone in the fields or behind starving livestock such as oxen, smaller farmers struggle to not only maintain themselves, but to serve the country as well. One of the common issues a modern farmer faces is that the, “soil fertility in many areas was trashed by decades of overuse of chemical fertilizers, up to the late 1980s,” causing current crops to suffer.

Among these physical issues lie the issues that cannot be seen, only felt by the people. North Korea’s strict regime includes, “state-controlled distribution, top-down planning and a quota system that doesn’t fully encourage innovation and individual effort. All these factors make North Korea’s agricultural sector a very fragile ecosystem,” forcing farmers to quietly suffer economically as well. With so many devices to control the farms, workers see little revenue and whatever they make immediately goes back to the state. This ultimately creates a cycle of poverty within the workforce, with the farm having barely enough to get by for the rest of the year.

Not all hope is lost though. Since the 90’s disaster that left so many suffering, there have been noticeable improvements that will hopefully allow for a more stable farming future. The total crop production is expected to rise five percent from 2013 to 2014, equating to about six million tons according to the U.N. Food and Agriculture Organization and World Food Programme.

North Korean farmers enter this farming season with a small sense of hope that the crops will yield the product necessary to survive, otherwise they may all be looking at a dim revisiting to the famine that threatened them years ago. 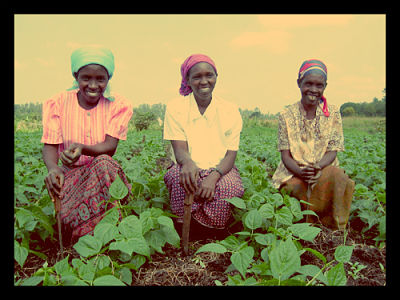 When this issue of global poverty and hunger is discussed, one topic is often central to the conversation is the impact of small-scale farmers. In the developing world, these farmers are essential not only for providing food for their communities, but also for creating jobs and improving the local economy. While many experts are adamant that encouraging small farmers to participate in the “global cash economy” – meaning that farmers operate primarily to sell crops for cash – is the most effective way to diminish global poverty, others are advocating for a new approach.

This new method focuses on “non-mentised agriculture” and acknowledges other factors besides the sales of surplus crops as a way to alleviate hunger and poverty. Another term for this new method is the concept of ‘value-chains,’ the link between “input suppliers, farmers and markets.” The Gates Foundation, the Alliance for a Green Revolution in Africa, USAID’s Feed the Future, and the G8’s New Alliance for Food Security and Nutrition support the utilization of value-chains and are confident in its ability to decrease global poverty.

Value-chains differ from the cash economy model by acknowledging that, although farmers need to earn money from their crops, not all of the crops will be sold on the market. One way farmers are doing this is by switching from growing cotton, which is strictly a cash crop and harmful to the environment, to other types of food crops (like rice, maize and soybeans in Ghana). Value-chains also call for more interaction between small farmers, markets, financiers, equipment services and other forms of agriculture training.

By working with these other groups, small-scale farmers will be able to better financially manage their farms and decrease production costs in order to increase surplus crops and earn a profit. With this method, financers also have the opportunity to invest in small farms. It is through improving agriculture strategies and creating business-minded farmers that profits will begin to increase not by farming primarily cash crops. However, because the chain-value method does not rely on many cash transactions, any economic improvements for farms go widely unreported. Once government officials develop a better tool for measuring such progress in the agriculture community, the impact of the chain-value will be better understood. 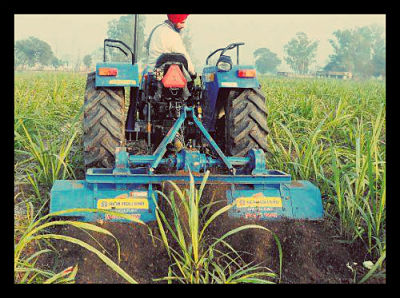 The US Agency for International Development is attempting to replicate the success of an Indian business in Africa. The effort is part of a three-year program called Africa Lead, which is associated with the US government’s Feed the Future initiative. Africa Lead aims to train Africans in innovative ways to tackle food security issues in their communities. USAID is sending Africans to Fazilka, a border city of Punjab in Northern India, to train with Zamindara Farm Solutions (ZFS). The company attempts to serve as an all-needs agricultural supply company, and its business model is unique and groundbreaking.

ZFS leases farm equipment with trained operators. This allows the owners of smaller farms, which are extremely prevalent in both India and Africa, to avoid taking out loans to make unnecessary investments inexpensive equipment. As a banker from Uganda who took part in the training program, Nicholas Abenda, observed, “Owning machines in not mandatory” for smaller farmers in Africa. The company also sells new farm equipment and provides maintenance and parts. It also offers education on the most efficient farming methods and on farm economics. It currently has operations in roughly 500 villages in India.

The ZFS business model has multiple advantages. It allows small farmers to avoid going into debt to purchase expensive equipment. Many farmers who make these types of investments are ultimately unable to repay their loans and become overwhelmed by debt. The ability to have access to the equipment without going into debt improves farmers’ financial stability. This allows agricultural production to become cheaper, which can increase farmers’ profit margins and decrease the price of food. Additionally, this business model encourages more farmers to use yield-boosting technologies that they otherwise may not have access to. USAID sees this business model as an innovative way to minimize food insecurity in underfed African communities.