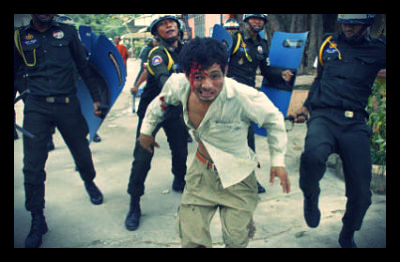 One bystander was killed and 20 people were injured when police clashed with protesting garment workers in Phnom Penh, Cambodia on November 12, 2013.

Workers at the SL Garment Processing Ltd. Factory, one of the largest in Cambodia and a supplier to many western brands including Gap and H&M, marched from the factory towards Prime Minister Hun Sen’s Phnom Pehn home to protest unfair wages and poor factory conditions. They were, however, blocked by police at Stung Meanchey bridge. Reports differ on which side started the violence, which escalated to more than 100 police officers firing tear gas, rubber bullets and live ammunition into the crowd, who were armed mainly with rocks and sticks. Police arrested 37 people, including seven monks, who were later released.

The march marked the three-month anniversary of 4,000 workers walking out of the SL factory to protest the presence of armed military police, which they viewed as an intimidation tactic meant to expel unions. Company shareholder Meas Sotha incited rage among workers with his claim that police were only there to protect the factory. SL 2 joined the strike, demanding raised salaries as well as a $3 per day lunch stipend and Sotha’s ousting.

Conditions in Cambodia’s more than 500 garment factories, though better than in some areas of the nation, are dismal. Wages are low—workers at SL, for example, make just $75 monthly—and factories are unsafe, with poor ventilation, recent collapses and regular fainting masses of malnourished workers. About 500,000 Cambodians work in garment and shoe factories, supporting the industry that accounts for 80% of the country’s exports. In 2012 alone, Cambodia exported $4.45 billion in products to the United States and Europe.

The protests erupted at a time of international attention on the garment industry following several deadly incidents at factories in Bangladesh, including a factory collapse at Rana Plaza that killed over 1,100 people in April. According to the New York Times, many multinational organizations are now looking to Cambodia as an alternative to factory locations in Bangladesh. Unfortunately, in Cambodia, strikes are frequent, though factory concessions are small and rare.

Workers at Alim Cambodia Co. Ltd. blocked a road in Phnom Phen on November 13, 2013 also protesting for higher wages. The demonstration was short-lived, breaking up due to rain when protestors became concerned they would get sick.  The Alim protestors were demanding a $1 lunch stipend, and were angry that the factory was paying new workers $93 monthly to their $89.

The Cambodian government has made few efforts to back garment workers, and seems largely indifferent to workers’ rights. In fact, government-official-mediated talks about wages between unions and SL ended in a deadlock.  Although the Cambodian People’s Party raised the monthly minimum wage from $61 to $75 earlier this year, reports by the local Community Legal Education Center and United Kingdom-based organization Labour Behind the Label found that a single garment worker needs at least $150 monthly to cover basic needs.

The United Nation’s International Labor Organization (ILO) released a report calling for the compliance of the Cambodian government and garment companies in improving workplace conditions in the garment industry, specifically concerning fire safety, child labor as well as worker safety and health. The ILO also announced in September it plans to continue the practice of “naming and shaming” factories that violate the law.