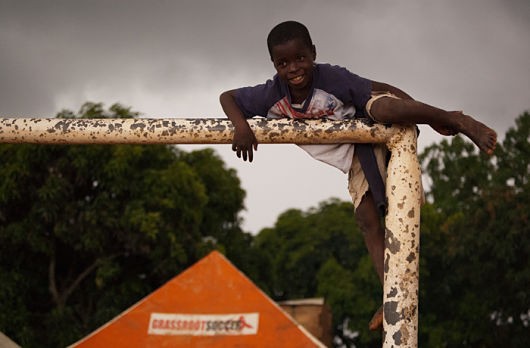 Founded in 2002 by four professional soccer players, Grassroot Soccer (GRS) uses the power of soccer to educate and inspire at-risk youth in developing countries to “overcome their greatest health challenges, live healthier, more productive lives, and be agents for change in their communities”.

According to UNAIDS, there are approximately 36.9 million people currently living with HIV and millions of people have died of AIDS-related complications. While new cases are reported in all regions of the world, approximately 70 percent are in sub-Saharan Africa.

According to the U.N. Food and Agricultural Organization, a combination of factors has contributed to this high rate in the sub-Saharan region. One major factor is structural poverty, created by unregulated socio-economic and demographic changes and geographical isolation. Other important factors include traditional gender dynamics and instability caused by years of civil unrest and war that prevents the establishment of strong resources.

According to the Grassroot Soccer website, about 40 percent of new HIV infections are among youth under the age of 24. The founders of the organization understood the consequences of not educating young people and saw the potential to focus on prevention and awareness to end the cycle of silence and sickness.

GRS developed the “Skillz” curriculum, which focuses on using the world’s most popular sport to help boys and girls adopt healthy lifestyles. Through a series of interactive activities and discussions, students gain an understanding of HIV and AIDS.

Key topics include avoiding risks, building support networks, increasing knowledge about testing and treatment, addressing gender issues and fighting peer pressure. Perhaps one of the most important features of the curriculum is that it provides young people with a safe space to talk in places where both HIV/AIDS and their victims have historically been stigmatized.

Another point of success is GRS’s ability to mobilize adults as trusted partners and role models. GRS holds workshops for local community role models, such as soccer stars, coaches, teachers and peer educators. Once trained, Skillz coaches implement the curriculum in their communities, both inside and outside the classroom.

An example of a popular activity for kids is “Risk Field.” In this game, according to the GRS website, “participants dribble a soccer ball in between cones representing HIV-related risks—multiple partners, drug and alcohol abuse, sugar daddies, etc.” If one player hits a cone, their entire team must complete three push-ups, showing how one person’s actions affect not only themselves but also everyone around them.

Other activities follow this same style of discovery-based learning. The GRS website claims “youth learn through active participation, as opposed to the passive chalk-and-talk style common among many African public schools.”

Additionally, Skillz Magazine has allowed the organization to reach even greater audiences and the instructors to keep their lessons fresh and exciting with new activities.

Skillz further challenges youth to “Make Your Move” and become community educators themselves with respect to HIV and AIDS.

A 2004 evaluation by the Children’s Health Council noted, “the percentage of students who could list three people they could talk to about HIV increased from 33 percent to 72 percent [between starting and completing a program].” Additionally, “the percentage of students who knew where to go for help for HIV related problems increased from 47 percent to 76 percent.”

While the pilot program began in Zimbabwe, it has expanded to multiple countries across the globe, including Brazil and Ukraine, due, in part, to partnerships with Peace Corps, USAID and FIFA Football for Hope.

Grassroot Soccer claims that 1,313,726 people have graduated from its various programs. As the organization continues to research and assess new programs in peace-building, obesity, gender-based violence and substance abuse, it will further connect youth with trusted community members, encourage young men and women to make educated decisions and empower them to shape the future of their communities and countries.