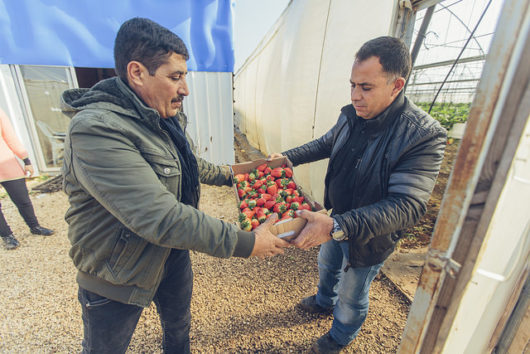 The West Bank and Gaza are considered Palestinian territories that have struggled with political power since the Six-Day War in 1967. This dispute has been between Israel and Palestine and the end result of the war has left the country in political turmoil. This devastated economic opportunities, local livelihood, sanitation conditions and household food consumption. In 2017, the 50th anniversary of Israeli occupation and the 10th anniversary of the Gaza blockade were marked. This has been affecting all job opportunities and proper food aid from entering the region. All of these factors have only made it more difficult to live in already precarious conditions and more risk for the already struggling population.

The U.S. government works closely with the authorities in Palestine to address the economic and humanitarian needs of the country. To improve economic growth, USAID has donated roughly $400 billion to improve in-house situations for companies and impoverished families in West Bank and Gaza. Providing basic needs like clean sanitation systems and safe work environments is essential to maximize productivity within the company and keep the workers healthy. Many companies suffer from a lack of resources and expertise for their products, so the project Compete will help business owners learn more about their product, how to maximize value for those products and increase employment within the surrounding areas. The goal is to increase competitiveness and revitalize the private sector, bringing to the table full-time jobs, part-time jobs, seasonal jobs and paid internships.

Food insecurity is a huge issue in the West Bank and Gaza territory as over 70 percent of people in this area suffer from lack of food and proper nourishment. Some of the causes for this are also a global phenomenon, environmental degradation, rising food prices and Palestinian food sovereignty. With food sovereignty, a state can control its own food resources, though that state has to have a self-sufficient food source with the help of government-controlled policies.

Since the occupation in 1967, Israel has confiscated thousands of acres of farming land and then separated it with the West Bank wall. With the separation of land, farmers are struggling to keep up the health with crops due to vandalism and destruction from settlers and the military. In Gaza, 25 percent of fertile land has been destroyed by the buffer zone, a zone that borders Israel. Patrol boats in the area only allow fishermen 15 percent of their territorial waters, further reducing the areas self-sufficient food sources. With the limitations on trade, environmental issues, confiscation of land and destruction of land, food sovereignty is unachievable. This has hindered economic growth and social conditions to reduce the levels of food insecurity.

Access to clean, potable water is limited by the wall between the West Bank and Gaza. Beaches, rivers and lakes are polluted and overcrowded refugee camps create health hazards for the sanitation systems. About 26 percent of diseases in West Bank and Gaza are related to filthy water. During the winter months, household septic tanks overflow and mix with rainwater, flooding homes and streets in the area. During the summer, the heat dries the streets from the flood and the smell coming off the streets is so bad that families keep their windows shut. Mothers refuse to let their children out to play because of the rancid smell and infected water.

Diseases continue to spread as garbage continues to pile up in refugee camps. The Anera organization is working on building proper waste management systems across Palestine, improving sanitation systems in the process. In 2014, Anera reconstructed sewage lines damaged by bombs. In refugee camps, they are taking an approach where the youth take the lead. Through campaigns designed to clean and recycle, they have developed a staff to train on proper waste management and a new sorting facility. They are creating a cleaner environment for 13,000 members of their community so far and will continue to reach out and help their people.

The health system in West Bank and Gaza has been shaped by years of occupation, political stalemate, violence and human rights violations. The barrier placed between the two territories limits access to East Jerusalem, the closest area that has specialized hospitals. The placement of these hospitals is scattered due to the many health care providers in the country. With the blockade in place, Gaza’s health care locations are experiencing unstable power supply and recurring power cuts.

The medical equipment has been deteriorating because of inadequate maintenance and spare parts cannot reach them. The barrier has also made it difficult to transport proper medicines to treat patients. All of these factors are crushing the health care system in West Bank and Gaza, making people seek treatment elsewhere though traveling in and out of Gaza is heavily restricted. Even with these limitations, health care in these areas still thrives. With the help of the World Health Organization, technical support will be provided to health technicians and fund projects created for diseases affecting the population.

Even with all of these issues, West Bank and Gaza still work out solutions to everyday and past problems. If these areas can continue to receive the funding from developed countries and nongovernmental organizations, they can grow back into the self-sufficient economy they once had.
– Kayla Cammarota
Photo: Flickr