Tag Archive for: Sierra Leone Trial to Introduce a Vaccine 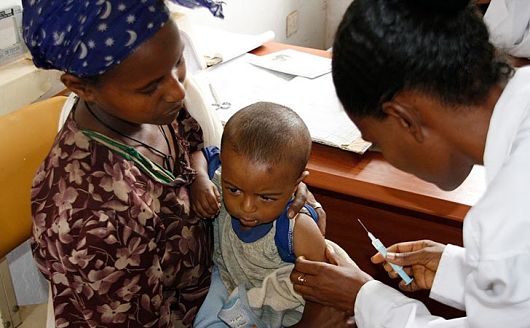 Poverty is defined by a lack of possessing shelter, food, water, money, sanitation, and health care. Without some of these basic rights, Ebola is a powerful enemy of the poor. So, how does Ebola impact poverty?

Ebola, a rare and deadly disease contracted through bodily fluids, still continues to affect parts of West Africa. In March of 2014, Ebola ravished Guinea, Sierra Leone, and Liberia, which resulted in 15,065 cases and 11,207 deaths.

So far, the outbreak shows no sign of slowing. The upcoming October election in Guinea has become increasingly concerning, especially because contraction is easier in overcrowded city environments.

Furthermore, Ebola impacts more than just patients; it impacts their families and the lives of others. With the outbreak in West Africa, food prices increased and food supplies dwindled. Sickness resulted in less work and less pay.

So how can the spread of Ebola be reduced? While medical quarantine has been used during the outbreak, many experts say that attacking poverty is the only true solution.

This being said, sanitation and hygiene are key. This includes clean and safe water. When a patient first contracts Ebola, scientists have discovered that replacing the liquids lost can successfully treat the disease. However, without a substantial supply of water for the number of patients, Ebola quickly weakens its victims.

Also necessary are protective and sanitary shelter, as well as greater accessibility to quality health care, even for those with struggling incomes.

Experts have also recently discovered that the disease can remain in semen up to five months after a successful recovery from Ebola. This suggests that education about safe sex and abstinence, as well as access to condoms, is crucial to the decline of patients with Ebola.

As of late, Ebola treatment research may offer hope to reducing the spread of the disease.

In April 2015, members of the Sierra Leone college of health services, sanitation, and centers for disease control teamed up to create a vaccine trial. This study called the Sierra Leone Trial to Introduce a Vaccine against Ebola (STRIVE). The study will assess the safety and effectiveness of the RVSV-ZEBOV vaccine. For more information on the details and successes of this study, visit http://www.cdc.gov/vhf/ebola/strive/qa.html.

For the even more good news, on June 24, 2015, researchers reported in MBio that generic heart disease medications might also have the potential to improve the immune systems of patients with Ebola. After a trial in Sierra Leone last fall, researchers were pleased to see improvements in the patients.

While these medications would not prevent or cure the disease, “it could allow individual patients to survive long enough to develop an immune response that eliminates the virus. These agents could be used in combination with anti-virals if they are available,” says David S. Fedson, MD.

Scientists plan to move forward with their research by performing more studies in West Africa. For more details, visit http://www.infectioncontroltoday.com/news/2015/06/generic-heart-disease-medications-offer-promise-for-ebola-treatment.aspx.

While these scientific discoveries offer hope, it is important that all people have access to vaccinations. Only then will able-bodied people be equipped to fight off poverty.