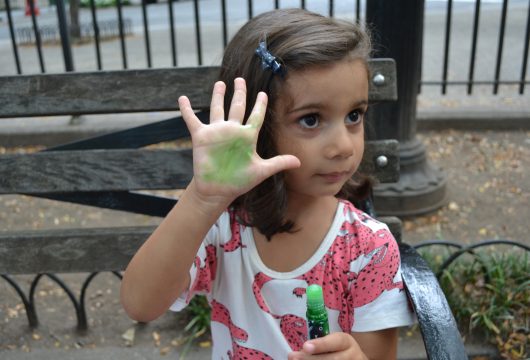 Revolutionizing hand hygiene, the “crayon-soap” hybrid known as SoaPen is the brainchild of Amanat Anand, Yogita Agrawal and Shubham Issar — a trio of industrial designers from the Parsons School of Design. Primary-colored and lipstick-sized, each pen is packed with an analogue solution that accommodates up to 60 hand washes, providing children a thrilling way to fight bacteria and develop a habit of hand-washing at a young age.

Fun and flair aside, Shubham Issar said, the SoaPen is primarily a teaching tool aimed at promoting “better hygiene practices among children” and illuminating the benefits of washing hands, a habit that can stonewall the spread of lethal viruses.

According to a study published by The Lancet, preventable infectious diseases accounted for two-thirds of the nine million child deaths in 2008. Pneumonia and diarrhea, two deadly diseases that can be suppressed by vaccines, jointedly contributed to 25% of 2015 deaths in children under five years old.

“There is not enough awareness around the benefits of hand washing, not only among children, but among parents, teachers and caretakers,” Issar said. “With SoaPen’s playful design, ability to mark all over a child’s hand, and portability we have created a teaching tool that opens dialogue around hand washing.”

SoaPen seeks to create a lasting psychological shift in the way children perceive hand washing by ingeniously transforming it from a chore to a pastime. Incorporating art and health, drawing and scrubbing, the product shows parents and children alike that hand washing can be made into a daily routine almost as exhilarating as tag.

In recent years, in-depth research has yielded alarming findings on the toxically high alcohol content in hand sanitizers — ranging from 45 to 95% — and how it severely cripples a child’s immune system. From 2010 to 2015, poison control center hotlines across the U.S. reported a 400% increase in emergency calls pertaining to inebriated children who had ingested excess sanitizer alcohol.

Parents are becoming increasingly anxious to find a safer replacement like the SoaPen, which Issar compared to a “portable soap.” Striking a delicate balance between caution and fun, Issar said, SoaPen “has a place in not just every classroom around the world,” but also every daycare center, pre-school and arts-and-crafts class.

One of the team’s priorities is to teach children in low-income schools the importance of hand hygiene and provide teachers creative methods of using the SoaPen. After conducting multiple campaigns in schools, team members report to seeing more lasting hand hygiene retention. The company hopes to develop a “buy one, give one” business model to convert product sales in the U.S. to donations toward developing countries, Issar said.

With a Kickstarter fundraising campaign already underway, the team plans to soon contact nonprofits in the hygiene sector to disseminate SoaPens through their extensive connections in poorer corners of the world.