Tag Archive for: Shortage of Food 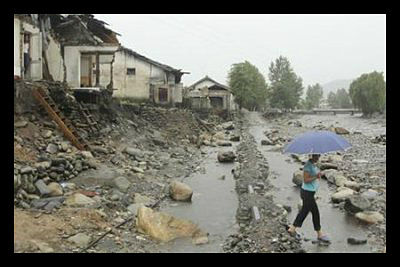 Throughout the month of July, North Korea has been struggling with severe rainfall. In turn, the United Nations has sent food in order to help the North Korean flood victims.

On July 11, in central areas of North Korea, there was as much as 20 centimeters, or nearly 8 inches of rain. As a comparison, the state of California sees 17.28 inches of rainfall every year. Hawaii has 23.47 inches.

North Korea saw in one day nearly half of the average yearly rainfall in California. Even the state with the most rainfall per year – Louisiana – only has 59 inches per year. So 8 inches would be about 1/7th of Louisiana’s yearly rainfall. It was devastating to the country.

As of July 15, over 750 people were homeless due to the flooding, while two people had been reportedly killed. The flooding has destroyed large areas of farmland in multiple provinces of North Korea, including South Hamkyong, North Hwanghae, and Kangwon.

The farmland that was severely damaged ranged across over 1,700 acres. This puts incredibly pressure on the agricultural sector of North Korea. The flooding has created shortage of crops and food within the country, leaving many people to face starvation. In July 2012, there was worse flooding – 88 people died and 62,000 people were left without homes.

Unfortunately, the floods of 2012 left North Korea’s agricultural sector nearly beyond repair. North Korea does not have the technology and infrastructure in order to survive when faced with natural disaster. The country will certainly face crop failure, food scarcities, and other problems within their country due to these unavoidable and devastating floods.

Experts believe the 2013 floods will have “a longer term impact on food security” than last year’s floods; other issues that are arising are the failing of early crops, like potatoes, and concern over public access to water that is safe.

Thankfully, North Korea is not alone in facing these problems. Indeed, the international community is already beginning to come together in order to give aid to those who are facing problems due to the flood, such as hunger and homelessness.

For example, the United Nations, through the UN’s World Food Programme, said that they have officially begun sending aid to North Korea. The aid includes emergency rations of maize to the major flood victims. They will be sending 460 tons to the afflicted country.

The aid will reach about 38,000 people who are living in the areas that have to deal with crop devastation. This is incredibly helpful, since it would be giving emergency aid to those who are forced to fight hunger and the lack of food security. 400 grams will be given to each individual each day for a month.

Another international organization that has come to the aid of North Korea is the International Federation of the Red Cross Crescent Societies (IFRC). They are providing relief aid to the areas that face the flooding, which involves doing whatever is needed within the actual areas of the flood, such as medical care.

Overall, the United Nations is providing a short-term solution to an emergency situation, which will be incredibly helpful to the thousands who will no longer be devastated by hunger. However, there is still much to be done on the long-term for North Korea, and hopefully, the international community will come together in order to help a struggling country.