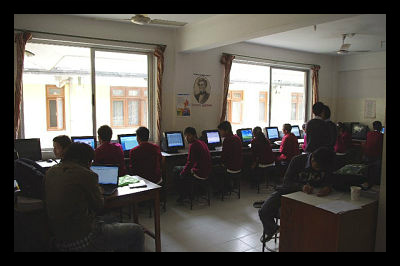 Living in a desolate village in Nepal, an education does not come easily. A village that is less than convenient to find, overlooking the Kathmandu Valley is where some students have received an opportunity of a lifetime. The village of Koth Gaun, Nepal is the home to Jeny Shrestha and Jayanta Tamang, two 18-year old Nepali neighbors.

Earning an education in Nepal can be a struggle. The two would go to any length to attend school, trekking 30-minutes to Bishwamitra Ganesh secondary school. The school only offers few children the prospect to complete high school and go on to higher education, which is very rare.

A unique opportunity to attend higher education was presented to the school, however, when the Samaanta Foundation, a small grassroots non-governmental organization that was started in 2012, saw the need in the village and reacted accordingly. Because of the organization the two will not only finish high school in Kathmandu, the capital city of Nepal, but be able to start their university studies shortly as well.

One of the students, Mr. Tamang will be studying computer programming at the prestigious school, St. Xavier’s college in the coming month. Ms. Shrestha will be starting her bachelor’s degree in business administration and is also moving to Nepal to do so. They are both so overwhelmed but excited about the possibilities that accompany an education.

Nepal is one of the poorest countries in the world, therefore, an opportunity to receive an education is very slim, especially in rural village areas of Nepal. Passing the S.L.C., the entrance exam to secondary school, is just the first barrier. The total passing of this exam is currently 43.9 percent, of which 78 percent of those that passed come from private schools in the capitol city.

Those that do not pass usually stay in the village and follow family lineage traditions. The Higher Secondary Board in Nepal requires the colleges to leave open spaces for those from rural areas;however,  those living in rural areas who do pass do not have the funding to move to a new city.

This is where the idea to found the Samaanta Foundation was born. Shrochis Karki, founder and executive director, wanted those young adults who had the knowledge to be given an opportunity. When education prospects do not work, usually due to lack of funding, an estimated 1,500 Nepalese leave the country every day in search of employment.

Karki knew that this needed to change.  Karki had previously worked for the NGO Federation of Nepal in the past and was able to receive some funding from them. Utilizing that money and fundraising from friends, Karki was able to fund six students to enroll into high school with the promise of being able to attend college.

Due to the commute, Samaanta has also helped with access to dormitories to stay at while the students attend school. The Samaanta Foundation is giving those who did not think they would ever have access to an education a chance to enact change and become educated. Read more about education in Nepal.