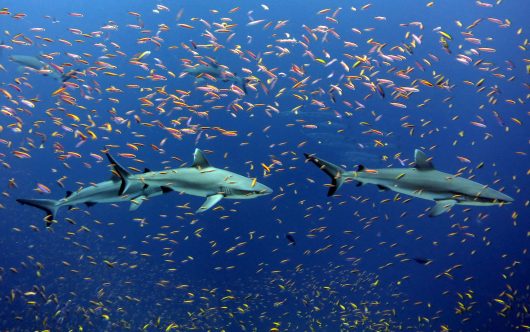 Sharks have become increasingly feared throughout the years. In 2017, more people were recorded being afraid of the animal than they were of death. Thanks to movies with ominous music preceding the creature’s appearance on screen, extensive media coverage of the few shark encounters, rather than the more extensive dog bites and lightning strikes, people are associating fear with sharks more and more. The marine animal is on more people’s minds now than gang violence, illegal immigration, or drought, but the truth is, sharks can reduce all of those things that attribute to human suffering. In fact, sharks can reduce poverty itself.

Sharks are considered a ‘keystone’ species among scientists meaning that they are essential in keeping their inhabited environments balanced and well. They keep the oceans and reefs from collapsing. Sharks keep the fish healthy by consuming the unhealthy and weak ones which allow evolution to strengthen fish. This not only maintains the populations and allows the plant life to thrive as a result of balanced amounts of feeding fish, but for the seafood that people in developing countries eat and sell to be of good quality. In short, saving the sharks save the oceans, and saving the oceans saves people relying on it for income and nutrition. In short, sharks can reduce poverty.

Many developing countries’ economies rely on the seas. Whether that be for their fishing markets, tourism due to beaches, or shark tourism itself (most sharks have been estimated to be worth over a million dollars for revenue over their lifetime), many poor communities depend on healthy oceans for sustainable human lives. Ocean conservation means prosperity, and one big way to do that is to save the sharks.

Currently, we are killing sharks faster than they can recover. Humans are poaching, accidentally killing them with other fishing gear, and getting them trapped in nets. Sharks have been around for 400 million years providing people with thriving oceans, and now 100 million are killed annually.

While it’s impressive that scientists are vocal about the climate, society needs to become educated about why sharks need protection. Reasons include:

Even just in terms of tourism revenue, a study of Palau found that each shark was worth almost two million dollars. The Australian Institute of Marine Science found that diver tourism made up 39 percent of the Palau’s income, and 21 percent of those same divers toured exclusively to see  sharks. Struggling communities can not only sustain themselves with the help of sharks, but can thrive.

Again and again it has been proven that sharks can reduce poverty, and therefore, should be protected. Spreading awareness about the animal’s positive impact on poverty-stricken communities can help those struggling in developing nations, and in the process, save the seas. Sharks need to stay.