While the current international focus in the Middle East has centered around Syria and the recent violence in Iraq, the impact of increased civil strife across the region will have serious implications for Lebanon.

The Syrian civil war has been going on for four years now, bleeding out into other areas as millions have been displaced from their homes. A huge influx of Syrian refugees have fled to neighboring Lebanon over the past several years, contributing to rising tension within Lebanon’s borders.

In order to escape the violence in their country, nearly 2.5 million Syrians have fled. There are currently over one million refugees in Lebanon alone; nearly half of the total number.

Lebanon’s current political system will not have a high tolerance for conflict as the country has just recently come out of a 15-year civil war.

The problem with Syrian refugees in Lebanon will come with challenges beyond the normal problems associated with displaced people. Refugees from Syria have the potential to increase sectarian violence among Sunni and Shiite communities. The Shiite militant organization Hezbollah supports Syrian president Bashar al-Assad’s regime. This provokes violence in Lebanon from an outraged Sunni community. The Sunni faction ISIS has been taking advantage of a weak government in both Syria and Iraq in order to take control of areas in hopes of creating their own Islamic state.

When leaders of Lebanon’s religious factions lose control over their territories, historically, chaos breaks out. Attacks occur in the form of kidnappings, assassinations and bombings.

Apart from violence, the refugee overflow overwhelms Lebanon’s already fragile infrastructure. Water, electricity and waste management systems have the potential to break down. This could lead to a disastrous shortage of water and electricity which in turn would allow for the spread of disease and contamination.

There is no easy solution to growing tension in Lebanon due to the increasing number of refugees. In order to avoid a renewed conflict in Lebanon, state institutions must be effective in calming the growing violence and tension between religious groups. Additionally, public healthcare and sanitation services must be enhanced.

According to Council of Foreign Relations Senior Advisor Monica Yaccoubiana, avoiding a conflict in Lebanon will take a huge effort to mitigate spillover effects of the Syrian conflict. These efforts must include ensuring humanitarian access to civilians inside Syria, working with the United Nations to improve access for aid groups, increase funding for assistance and initiating high level meetings between global political leaders and Lebanese officials in order to encourage consensus building and implement solutions.

Continued sectarian violence in Nigeria resulted in the widespread abandonment of farms. Conflict spreads throughout the country, affecting the agricultural season in rural and often isolated regions. This led to dramatic decline in household food stocks. In addition to farming, the conflict limits “off-season livelihood activities” such as fishing.

This coupled with a predicted shortened growing season to create a potentially devastating food crisis. Consequently, Nigerian government reported as many as one million people facing food shortages in the coming months.

The Islamist insurgency in northern Nigeria, which began in 2009, has forced more than 365,000 people to flee their homes and farms. Agriculture generally serves as the primary means of support. Moreover, as refugees, these families have little opportunity to independently replenish their food supplies. According to The Guardian, “violence linked to the Boko Haram insurgency has caused 60 percent of farmers to leave the fertile region.”

In addition to low production, this conflict led to disruption in trade routes. Those managing the trade fear security, for the products and their lives. As production declines, the prices for staple food rise. These prices rose an estimated 10 percent from last year and more than 30 percent from the five-year average.

Alone, this lack of production has led to serious food shortages. Now, the strain of drought-induced food shortage threatens a full-scale crisis. According to The Nigerian Meteorological Agency, the national agricultural sector depends heavily on rain, “with the bulk of its produce cultivated in the north and central regions.” Weather forecasters predict the rainy season to begin in June, though it typically starts in May. In addition, the rain season may end before September. The result: a severely shortened growing season. With a population of 160 million to feed, Nigeria prepares this looming food crisis.

Refugees and farmers affected by the drought cannot afford the drastic rise in prices. Without an independent stock of food, though, these individuals must rely on the market.

In response, farmers are encouraged to use early maturing seeds to help generate a shorter planting season.

However, as Ibrahim Mota of the Dawanau Grain Traders Union shared recently, “Seeds, no matter how sophisticated, have to be planted by humans to germinate.” The Famine Early Warning Systems Network continues to monitor the food supply in this region, encouraging the Nigerian government to alleviate the burden of this conflict on farmers. Without details on the exact tactics to mitigate conflict, families live in constant risk of acute food security.

The Syrian conflict has continued for three years at this point and there seems to be little hope that it will be solved anytime soon. The conflict between Russia and the United States over Ukraine puts any future peace conferences in flux, and the attention of the international community has largely shifted to that part of the world. However, for the countries around Syria, the crisis there is still a daily ordeal with Syrian refugees flowing in from the beleaguered nation.

Lebanon has taken the bulk of the masses from Syria. Since the beginning of the conflict almost a million refugees have come into Lebanon and projections have that number going up to 1.5 million by the end of the year if nothing changes. A representative from the United Nations High Commissioner for Refugees (UNHCR) said that the influx “is equivalent to 80 million Mexicans arriving in the U.S. in 18 months… the largest per capita recipient of refugees anywhere in the world.” While Lebanon continues to generously take in the refugees, the influx has put a severe strain on the country’s infrastructure.

Studies done by the United Nations have shown that many of the refugees are settling in Lebanon’s poorest regions, where the least amount of assistance can be provided. This has left both the refugees and the Lebanese poor at a disadvantage, with little room for the country to move them.

One potential problem with this influx are tensions existing between the various religious groups in the area. Lebanon has a diverse religious population, but the many Sunni refugees coming in from Syria will upset the balance in Lebanon. With sectarian violence a key part of the Syrian conflict, worries are that tensions could erupt in Lebanon and put more people at a disadvantage.

The United Nations is trying to remedy these problems facing Lebanon. The UNHCR put out a call for $1.9 billion to help refugees in Lebanon, yet the agency still hasn’t come close to meeting that goal. Viral campaigns centered around pictures taken at refugee camps have served to attract notice, it sill has yet to be seen whether the campaigns will bring in more funding for the projects.

Lebanon might be the biggest location for Syrian refugees, but all the countries bordering Syria have been affected by the war. The World Food Program is planning to assist 2.9 million people in countries such as Lebanon, Jordan, Turkey, Iraq and Egypt. With 12,000 people coming into Lebanon a week, more help will be needed. The time to act is now, even as the countries of the West may be focused elsewhere. 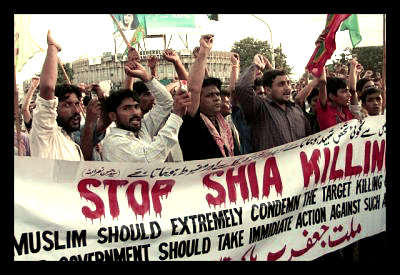 Sectarianism reared its ugly head again in Pakistan last month, as a Shia procession on one of the faith’s holiest days devolved into bloody street clashes that left at least 11 people dead and underscored the violent nature of sectarian fissures in Pakistan, where more than 300 members of the country’s long-disenfranchised Shia minority were killed during the first half of 2013 alone.

Last month’s clashes between Sunnis and Shias in the garrison city of Rawalpindi were a mere appetizer from a much larger menu of religiously-tinged violent incidents that have rocked Pakistan since 2011. Unfortunately for the country’s Shia community, members of this minority faith have borne the brunt of this sectarian violence, as militant Sunni outfits such as Sipah-e-Sahaba target followers of an Islamic sect for which they hold not just contempt, but venal hatred.

Sectarian violence aimed at Pakistan’s religious minorities is not a new phenomenon to this predominately Sunni country, but its escalation since 2011 has been palpable. That year, according to a report by Human Rights Watch, was one in which, “Religious minorities faced unprecedented insecurity and persecution.” Extremist attacks took the lives of scores of people across the country, including two prominent government officials, Punjab Governor Salmaan Taseer and Federal Minorities’ Minister Shahbaz Bhatti, both of whom were murdered by religious fanatics for publicly supporting a revision of Pakistan’s hard-line blasphemy laws.

The carnage continued unabated in 2012, as Sunni militants from such extremist groups as Sipah-e-Sahaba and Lashkar-e-Jhangvi (L-e-T), both of which adhere to the austere Deobandi school of Islam, unleashed a bloody wave of violence that included a September massacre in which gunman stopped a bus in Baluchistan Province, and after checking identity cards, removed the Shia passengers from the bus and then gunned them down, killing 26 Shia pilgrims.

Altogether, nearly 400- mostly Shia- Pakistani’s were killed in sectarian violence in 2012, according to the Center for Research and Policy Studies. This year is on pace to be just as deadly, with more than 300 Shias killed in four large-scale attacks in the first half of 2013, including twin blasts that took the lives of at least 93 people in the city of Quetta on a particularly bloody day in January.

Many of the plethora of sectarian attacks that have torn Pakistan’s delicately knitted social fabric in the past few years also have an ethnic dimension to them. Most of the Shias killed in these attacks are also Hazara’s, a Persian-speaking ethnic group whose Mongolian features easily distinguish them from Pakistan’s ethnic Punjabi’s, Pashtun’s, Baluchi’s, Sindhi’s and Mujahir’s.

The plight of the Hazaras, more than a thousand of whom have died in targeted killings in the past decade, is compounded by the fact that most members of this minority ethnic group are Shia. Their distinct facial characteristics make Hazaras, who are found in greater numbers in Afghanistan and Iran, an inviting target for Sunni extremists seeking to kill members of an Islamic sect they derisively denounce as heretics.

While most governments would take swift action to shut down militant groups seeking to sow sectarian discord among their country’s citizens, successive Pakistani governments have been cowed and intimidated by extremists, doing next to nothing to corral the groups that publicly assert responsibility for attacks targeting Shias or Ahmedis, another sect of Islam despised by the myriad hard-line Sunni Islamist groups that openly operate in Pakistan.

In its report on the state of affairs inside Pakistan in 2011, Human Rights Watch notes the Pakistani governments laissez-faire attitude towards dealing with extremists, asserting that, “Sunni militant groups, such as the supposedly banned Lashkar-e Jhangvi, operated with impunity even in areas where state authority is well established, such as the Punjab province and Karachi.”

The propensity of Pakistani politicians to placate sectarian extremist groups was on full display this past March, when the provincial government of Punjab, Pakistan’s most populous province, released some 150 militants it had rounded up following an especially vicious sectarian attack in Quetta the previous month that killed at least 79 people in a market packed with Shia Hazaras.

The political party that ruled Punjab- the Pakistan Muslim League-Nawaz–at the time of the militants release–now heads the federal government, an ominous portent for Pakistan’s Shia community, who must be left wondering if Pakistan’s leaders possess the political will to give reconstructive surgery to the county’s ugly sectarian face.