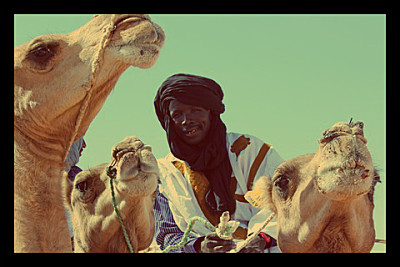 In western Africa, an entirely new generation has risen out of sand, tents, and mud blocks. Though born into this kingdom of sand and pumped water wells, home lies miles away with the vast Atlantic Ocean for these life-long refugees.

In the most barren regions of western Algeria, five refugee camps collectively called the Polisario Front were established in the mid-1970s in response to land disputes spanning two decades of armed conflicts. Home to 150,000 Sahrawis, the current state of the camps themselves has received scarce media attention.

The Sahrawis tribes in West Africa have lived in the Polisario camps bereft of a stable home country since the 1970s. After 37 years of laying in wait to return to their homeland in the West Sahara, the Sahrawis remain involved with the longest-running conflict involving displaced persons.

The dispute involves a strip of land called West Sahara in northern Africa. When Spanish colonial forces withdrew power from the area in 1976, the Moroccan government immediately seized control of the densely Sahrawi-populated land.

Rebel Sahrawis engaged in armed conflict against Moroccan forces for two decades until the U.N. mandated a ceasefire in 1991. Part of the referendum was to hold a vote in the Polisario Front as to whether or not the refugees would remain independent or integrate into Morocco. In 2013 there has yet to be a vote on the issue. The stall on the vote and major political action has perpetuated life in the Polisario Camps, spanning decades.

Many of the founding members of the camps were young orphans who fled the violence of the 1970s with only their lives. They have since then established schools, hospitals, and their own governing bodies. Democratic ideals, the freedom to practice any religion, as well as equality between women and men are the principles of the camps. When men went to fight in West Sahara from the 1970s to late 1980s, women were left to take on leadership roles at the camps and have since retained their independence.

Food assistance comes directly from international aid provided by organizations such the World Food Program. Food security is nearly impossible due to the barrenness of the surrounding lands. Malnutrition and anemia are rampant among the refugees due to deficiencies in iron and other essential vitamins.

Working Sahrawis have been receiving monthly stipends from the U.N. High Commissioner for Refugees in lieu of real salaries.

Though the refugees need $130 million of international aid yearly to support all of their people, only $70 million year is given to them. Lack of U.S. efforts has been cited for the lack of attention to this area, especially in comparison to the unrest boiling in Iran, Egypt, Syria, Israel and Palestine, and the Persian Gulf.

As to the fate of the Polisario Camps, they are now the target of militant extremist groups because of their fundamentally democratic values and difference in religious views.

Al Queada has also been known to run freely in and around the area, making the camps a potential recruitment ground for terrorism, especially with the rise of a new impatient generation from the camps. However, anti-terrorist security measures were elected and put in place by the refugees and their leaders.

The refugees seem resigned to life in the camps while their leaders are pressured for a solution—one that can either end in Morrocan absorption or decades of more fighting. With foreign aid acting as their life blood, cutting off such programs could plummet the Sahrawis to the brink of annihilation.