Fear has been renewed over El Niño, a climate event that is known to generate disastrous impacts.

The United Nations and the World Health Organization (WHO) are scrambling to coordinate with regional offices to discuss disaster preparedness strategies for the upcoming El Niño season.

According to National Geographic, El Niño “is a climate pattern that occurs when the surface waters of the Pacific Ocean become unusually warm.” The warming trend is caused by “weakened trade winds” that allow for warm water to displace cool water that is otherwise normally found in the Eastern Pacific Ocean.

El Niño is often characterized by torrential rain, as evidenced by Hurricane Patricia late last month. It is important to note that it is also associated with crippling droughts, such as what is occurring in Ethiopia.

One of the regions that are bracing for El Niño is found east of Australia in a chain of islands know as the Pacific Islands.

“These coming months have the potential to be the most testing period in the history of the Pacific Islands,” said Magareta Wahlström, head of the U.N. Office for Disaster Risk Reduction (UNISDR).

According to the U.N. Office for the Coordination of Humanitarian Affairs (OCHA), approximately 4.5 million people across 11 countries are under El Niño watch.

The effects of the climate pattern are far reaching. It can have calamitous affects, resulting in destroyed infrastructure and human displacement. Because El Niño occurs near impoverished geographic locations, the need for preparation is imperative.

“The El Niño phenomenon is a major concern to global public health as it has the potential to exacerbate health risks associated with extreme weather in different parts of the world,” stated a WHO status report issued recently on Health Preparedness for El Niño Event 2015-2016.

The two agencies are working directly with the Ministries of Health, providing advice on risk management as well as constructing contingency plans. Additionally, they are looking at the best ways to rebuild after disaster occurs.

While the U.N. and WHO are collaborating with regional offices, they are also operating at an international level, finding solutions to improve emergency response as well as raising awareness on the issue. 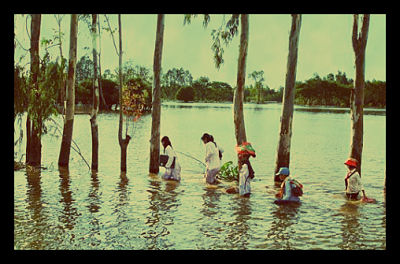 In its annual World Development Report on October 7, the World Bank stated that successful risk management can be an essential tool for development.

Risk management in development involves policies that can help improve the negative effects of natural disasters, economic shocks or health crises. The World Development Report suggests that poor risk management has resulted in a staggering child mortality rate from injury and illness in low-income countries, one that is nearly 20 times higher than that in high-income countries. These slacking policies have also led to more deaths during droughts in Africa than from any other natural disaster. However, if governments and decision-makers can create more durable environments for managing risks, these trends can indeed be reversed.

“Risk management can save lives, avert economic damages, and can provide resilience and prosperity by allowing people to undertake new endeavors,” said Norman Loayza, director of the 2014 World Development Report.

The World Development Report has been released annual since 1978 and is the World Bank’s most comprehensive publication. As inferred, this year’s report looked at how managing risks can end poverty and increase equity.

As of now, many societies and individuals fail to tackle risk successfully because of lack of resources and information, missing markets and public goods and even more, social exclusion. “We’re advocating a sea change in the way risk is managed,” World Bank President Jim Yong Kim said. “Our new approach calls for individuals and institutions to shift from being ‘crisis fighters’ to proactive and systematic risk managers.”

The report tells us that because most individuals remain ill-equipped to confront many shocks and disasters, they must instead depend on shared action and responsibility. Without coherence from the international community, individuals, states and nations will continually be unable to handle problematic events on their own terms.