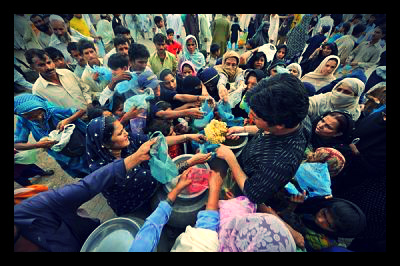 A report titled “Right to Food” was submitted to the United Nations Human Rights Council in which the contemporary distribution of food was addressed. Currently, major corporations maintain control over food production and distribution—which has caused problems for society at large.

The World Food Programme stated that there are currently 842 million people without steady access to food. The UN special rapporteur on the right to food asserted that the global food system is in dire need of reform, especially considering some of the significant environmental and technological changes in society. The worldwide human population is expected to rise significantly while limited resources continue to be threatened by a global climate at risk.

Currently, the system of food production and distribution is in the hands of prominent corporations that have utilized the industrial processes to increase the efficiency of resource distribution overall. It has allowed for the global population to expand significantly in the 20th century and will continue to do so regardless of some of the environmental threats we face.

Some of the corporations that control food distribution are ConAgra, Cargill and PepsiCo. In order to be able to maintain their efficiency in distributing food resources, they rely heavily on chemical fertilizers, pesticides and fossil fuels to maintain their operations. The industrial revolution marked the start of the utilization of external variables to impact food production. At the time, the global population was rising and the green revolution was necessary to sustain the population.

However, the distribution of food is now becoming outdated with environmental issues, and the system indicates challenges that may require institutional reforms to be addressed. With so much of the global population without stable access to food resources, a rise in global population will further complicate matters.

Moreover, industrial food production also requires intensive freshwater use—which is also a limited resource. So if the United Nations is able to meet its goals of supporting fundamental human rights in the access to food, the industrial food distribution system will have to adapt. Corporate sources of food distribution have been unreliable in allowing for the general population to have access to the resources they need to survive—which is causing the issue to be considered from a human rights perspective.

Society is changing faster than ever before. With the level of technological development today, we can expect to see our world become increasingly fragile. Therefore, sustenance will require the consideration of sound approaches to distribution of resources, such as food.