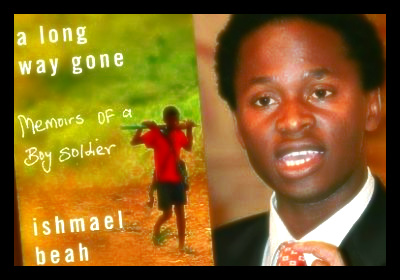 These three African men have used their horrific childhoods as fuel for activism to heal and prevent the abuse of future children.

During Sierra Leone’s civil war, which lasted from 1991 to 2002, 12-year-old Beah became separated from his family and wandered the country with a group of other children. The group stumbled across a battalion of anti-rebel soldiers and the children were taken in and taught to kill.

Beah was rescued by UNICEF after living as a soldier for two years, and was taken to a rehab center where he struggled for eight months to remember who he was before the war. When he was 17, Beah was adopted by a member of UNICEF as a means to get out of Sierra Leone and attend school.

It was during his time at Oberlin College in Ohio that he wrote “A Long Way Gone: Memoirs of a Boy Soldier,” which Beah claims he never meant to publish, but wrote to “find a way to give the human context that was missing in the way the issue of child soldiers were discussed.” His book has become a best-seller, and Beah has recently released his second book, “Radiance of Tomorrow.”

Beah is now a UN ambassador for children affected by war, and he travels with UNICEF to work with former-child soldiers. He remembers what it was like to suddenly find himself expected to be a kid again, and he wants former child-soldiers to know that they have options – that they can choose to live a life devoid of war.

At 14, Ricky was forced to watch as his entire family was corralled into their house, locked in, and burned alive. He was then bound into a service of slavery for the Lord’s Resistance Army (LRA) of northern Uganda where he regularly witnessed torture, rape, and murder.

He was one of the few who managed to escape and, after obtaining his degree, he set up Friends of Orphans (FRO), an organization that works to reintegrate former child-soldiers back into village life and provide them with the therapy and education necessary to become peaceful members of society. So far, the organization has helped 25,000 children attend school and learn a trade.

The organization also educates those with HIV/AIDs on how to deal with their disease and prevent further transmission. They have distributed over 100,000 condoms since beginning the program.

FRO has been awarded the John Templeton Foundation ‘Freedom Award’ and Ricky was awarded the ‘World of Children Humanitarian Award’ for his tireless work to provide a life for those who’ve had theirs stolen by war.

Growing up in south Sudan, Jal was 7 when his father left to join the Sudan People’s Liberation Army (SPLA), his mother was killed by soldiers and he saw his aunt raped. He was promised an education in Ethiopia as part of a group of kids, but upon arrival they were forced to become soldiers of the SPLA.

After nearly five years living as a soldier, Jal was rescued by British aid worker Emma McCune, who smuggled him into Kenya. When McCune was killed, Jal completed his education and now makes it his life’s work to share his story and is an advocate for the Make Poverty History campaign, the Coalition to Stop the Use of Child Soldiers and the Control Arms campaign.

Jal has made a name for himself as a recording artist, releasing the album ‘War Child’ as well as a film and autobiographical book both under the same name. He travels the world speaking on the global issues that have played a hand in his life, and he’s most recently appeared at the TED Global Conference in Oxford.

Jal stresses that education is the only way to move forward and prevent further genocides, and has founded Gua Africa, a foundation to educate children. After being disappointed with the level of donations he recently embarked to eat only one meal a day, something he says is regular for the people in his country, and he donates the unspent money to his own organization.