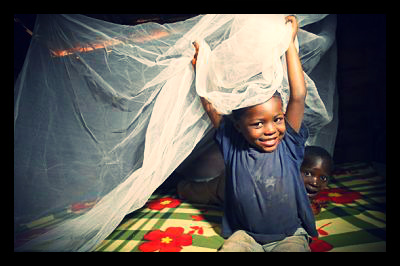 Although malaria prevention has long been a focus of the United Nations Foundation, it was an article in Sports Illustrated that spurred the creation of its successful Nothing but Nets program, now the world’s largest grassroots campaign to end malaria.

In 2006, Rick Reilly wrote a column that challenged readers of the popular sports magazine to donate at least ten dollars to the United Nations Foundation to cover the purchase, distribution, and education costs of a life-saving malaria bed net. The response to this simple call to action was huge, and Nothing but Nets was born.

Nothing but Nets is a program that focuses on distributing long-lasting, insecticide-treated bed nets to save lives in sub-Saharan Africa, where 90 percent of all malaria deaths occur. The number of people affected by this preventable disease is truly staggering—every second, there are ten new cases of malaria. Every 60 seconds, a child in Africa dies from the disease. The disease disproportionately affects those who cannot afford treatment and those who have limited access to health care.

In addition to the costs to human health, malaria is responsible for about $12 billion annually in lost productivity in Africa. The disease increases school and work absenteeism, decreases tourism, inhibits foreign investment, and affects crop production. Malaria is a costly disease that accounts for up to 40% of public health expenditures, 30-50% of inpatient hospital admissions, up to 60% of outpatient health clinic visits.

Malaria, though devastating and deadly, is a highly preventable disease—the UN found that in high coverage areas, the disease can be reduced by 90 percent—with simple solutions. And, as reflected in the World Health Organization’s 2012 World Malaria report, those solutions are working. A few years ago, malaria was the number one cause of death among African refugees. Nothing but Nets worked closely with the UN Refugee Agency (UNHCR) to distribute more than a million nets to this group. Now, malaria is the fifth leading cause of death among African refugees. Since 2006, Nothing but Nets has raised $45 million and distributed more than seven million bed nets to families in need. While these statistics reflect huge progress, there is still much more to be done.

The good news is, it is easy to get involved and start saving lives. Nothing but Nets is unique in that it provides the opportunity for anyone with ten dollars—from CEOs to students—a chance to join “Team Bzzzkill” and make a huge difference. This simple, straightforward approach has won the support of many individuals and organizations, ranging from NBA Cares and The People of the United Methodist Church, to Bill and Melinda Gates, to famous athletes and rock bands. Thousands have stepped up to Reilly’s challenge to donate a net and save a life. Will you?

Visit www.nothingbutnets.net to learn more and donate a net to save a life.