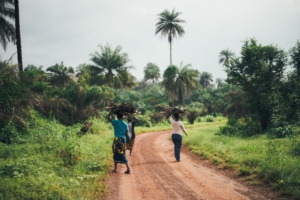 Government findings in 2020 report a 60% decline in average weekly profits for businesses operating in Sierra Leone. However, customer demand witnessed an 80% decline by late May. Around 60%-70% of businesses had “difficulties accessing suppliers.” The liquidity status of several businesses declined and 52% were behind or likely to fall behind on paying their rents. Employees reported momentary layoffs, while others experienced reductions in working hours, to reach around four to six hours. The impact of COVID-19 on poverty in Sierra Leone is further exemplified through youth unemployment, which forced the closure or scaled down operations of many youth-owned businesses in Sierra Leone. Youth unemployment reached 60% in 2021 and Gross Domestic Product (GDP) contracted by 4% in 2020.

Prior to the global COVID-19 pandemic, 71,000 tourists visited Sierra Leone in 2019 and projections have stated that tourism generated $39.00 million corresponding to 0.93% of GDP. This is demonstrating the power tourism has on the country’s income and economy. With travel restrictions, the level of tourism fell by 77.3% in 2020 as per Ministry of Finance records. This pushed 97% of tourism businesses into experiencing a massive impact on operations. Besides that, 29% of them encountered either provisional or permanent closure.

Accordingly, it is evident that the impact of COVID-19 on poverty in Sierra Leone is showcased through its direct ramifications on the country’s economic strength and employment rate, especially with 8,000 people working in the tourism sector indicating its importance in the development of Sierra Leone.

Around 30% of Sierra Leone’s capital, Freetown live on less than $1 per day, the international poverty line standing at around $1.90 per day. Among 116 countries, Sierra Leone ranked 106 in the 2021 Global Hunger Index illustrating the severity of the food crisis. Recent 2022 records validate that 73% of the population is experiencing food insecurity, 11% of which are acutely food insecure. This illustrates direct challenges to human welfare and basic standards of living, especially as 74% of households reported using more than 75% of their income on food.

To build and encourage economic resilience, in 2020, the World Bank permitted the International Development Association to support Sierra Leone with a grant worth $100 million. Such financing supports the development of greater productivity in varying sectors including agriculture, a primary sector of Sierra Leone’s economy. In 2021, economic growth accounted for 3.1%, with agriculture contributing for half the rise.

To further sustain the government’s ability in delivering rudimentary human rights such as education and health care services in the midst of an economic crisis, in 2020 the European Union allocated €10 million in economic support. For instance, improvements in health care are evident in the infant mortality rate, declining from 78.643 for every 1,000 births in 2019 to 72.253 for every 1,000 births in 2022.

In 2021, the International Organization for Migration (IOM) launched a vocational training program in Sierra Leone worth $4.3 million to close the gap between labor and the necessary skills the market demands. This program has reached out to 940 participants thus far and seeks to eradicate unemployment in the country by developing skilled labor, thereby fostering a population capable of initiating independent economic growth, according to IOM.

A similar effort by the United Nations Development Programme (UNDP) promoted inclusive growth among rural areas in Sierra Leone. The UNDP trains youth with a skillset that advances their employability prospects in a globalized world.

Partnering with Restless Development and the Institute of Development and Humanitarian Assistance-IDHA, the UNDP further issued grants to over 1,000 youth business owners to preserve businesses from closing, as reported on its website. Business owners reported they have been able to grow their businesses, as well as offer employment opportunities.

With collective effort from the European Union, the U.S. and China among other multilateral donors, the World Food Programme (WFP) delivered food and nutritional support for around 540,000 people across Sierra Leone in 2021. To further support the U.N. Peacebuilding Fund Project, the WFP partnered with the Ministry of Agriculture to enable the development of inland valley swamps and create a continuous and lifelong food supply.

The impact of COVID-19 on poverty in Sierra Leone has presented pronounced challenges on varying economic and social levels. However, with the right collective efforts such as UNDP grants, the economy can recover to allow its population to lead a prosperous future.