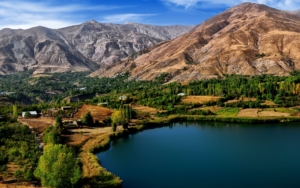 Logic follows that the wealthier a country becomes, the more financial resources it should have to combat poverty. The European Union countries and the United States have many programs to address domestic and global poverty, administered by both non-governmental (NGO) and governmental organizations. Taking the logical argument further yields that countries with vast natural resources should be equally capable of fighting poverty. By monetizing their vast natural resources, they should have plenty to provide for their citizens. The reality though is starkly different due to the resource trap.

While rich countries are capable of enacting change, the manner by which their wealth was accumulated affects how their governments appropriate funds. The resource trap, or resource curse, as called by the Natural Resource Governance Institute (NRGI), posits that resource-rich countries tend to have higher rates of conflict and authoritarianism combined with lower rates of economic stability and economic growth. Along with the NRGI, Bloomberg finds that countries with vast natural resources have high degrees of conflict, corruption and poverty.

One of the many examples of this conundrum in the world today is Iran. According to the CIA’s World Factbook, Iran’s economy has a large industrial sector which makes up 35.3 percent of the country’s GDP. Iran’s large oil reserves gave rise to its top three industries: petroleum, petrochemicals and gas production. These three are resources commonly cited in reports regarding resource traps.

Even though Iran is rich with natural resources, it has an Aggregate Freedom Score of 18/100, which categories the country as “Not Free”. In their report on Iran, Freedom House cites antigovernment protests over the worsening economy and corruption as a factor in Iran’s low score. These dynamics have rendered the country prey to the resource trap. Resource traps like those found in oil-rich countries are especially troublesome because their governments are beneficiaries of vast amounts of income that would otherwise come from taxation. Since the government does not depend on tax revenues to remain in power, the will of the people tends to be ignored, which leads to unchecked corruption.

NGOs combating corruption in oil-rich countries work to address how petroleum-based revenues are used to suppress its people. According to Radio Farda, Iran has a record of marginalizing NGOs that attempt to address the exploitation of its citizens. Solving the riddle of resource-trapped countries is a hard task and involves a multitude of tactics. Most of the work done by NGOs in Iran is done through the World Bank’s Economic Monitor program. Monitoring efforts like these where selected topics of interest to Iran and the international community are published provide data useful in liberating countries from their resource traps.