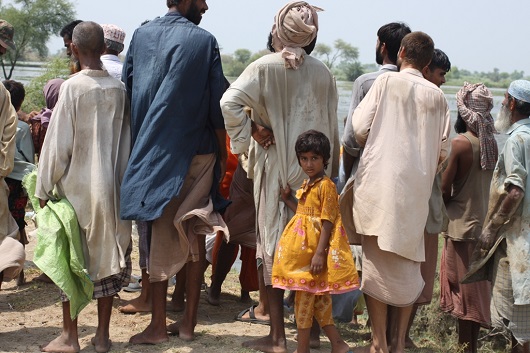 The actions of individual people like Ghalib Khalil have been cited as the spark for many great advocacy and social movements. As Nelson Mandela once said, “It is time for the next generations to continue to struggle against social injustice and for the rights of humanity. It is in your hands.”

This is exactly what took place in 2010 in Pakistan after the country was devastated by flooding. Ghalib Khalil, inspired to help his country recover from the natural disaster, realized that his own solitary efforts would not be enough to make a big difference. Guided by the advice of a teacher, the 15-year-old created the Rescue Pakistan Youth Foundation. Networking for the organization on Facebook, Khalil used his connections to mobilize support and a volunteer force of several hundred Pakistanis.

This volunteer force engaged in door-to-door collections to help make a difference, but Khalil knew that he still wanted to make a bigger impact. By reaching out to large international corporations and other non-governmental organizations (NGOs), Khalil was able to dramatically expand his impact on advocacy. Due to the creation of Rescue Pakistan Youth Foundation, he successfully raised more than $100,000 to aid in relief efforts.

Since then, Khalil’s impact on advocacy has only continued and increased. After Pakistan recovered from the flood, Rescue Pakistan Youth Foundation continued to take donations for local community projects, but Khalil has set his sights on the struggle for peace. Peacetide, originally named Friends Without Borders, is an international advocacy campaign that focuses on promoting mutual respect and peaceful relations between Israel and Palestine, India and Pakistan, Greece and Turkey, Kosovo and Serbia.

The campaign is aimed at 14 to 25-year-olds, using visual storytelling through videos, pictures, art, inspirational quotes and personal testimonials for peace from its members. To date, the campaign’s main promotional platform on Facebook has more than 40,000 followers.

Both Rescue Pakistan Youth Foundation and Peacetide have achieved a positive impact on advocacy on a grassroots level while helping to educate, promote international peace and make a tangible difference in local communities in Pakistan. The secret to the popularity of Khalil’s organizations is connection, which is perfectly summed-up in Peacetide’s motto, “Goodness is growing one friend at a time.”