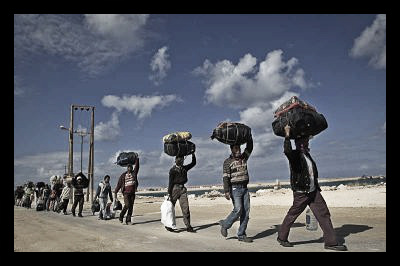 Migrant workers are a common sight among the busy streets of Singapore; they have been essential to the growth of the impressive buildings that paint the skyline. But like many countries that rely on migrant workers, abuse does rear its ugly head.

Many workers who make their way to Singapore seek money that simply is not available in their home country. Typically, they sign a contract, allowing them to reside in the country for a specific period of time.

Workers who do not wish to leave are put in the hands of companies that specialize in corralling migrant workers and forcibly removing them from the country. Many of these companies have been known to use intimidating and sometimes violent tactics.

Bapari Jarkir, a Bangladeshi migrant worker, encountered the employees of a repatriation company at the point of a knife. His employer wanted to expel him off his job as a welder, but he refused due to the high amount of debt he incurred while moving to Singapore.

He was escorted to the office of a repatriation company, where he was forcibly detained for several hours until he agreed to sign a document saying he was responsible for paying his $3,900 bond that each construction firm must give up to the government for each migrant worker. The bond money is usually returned to the company once the migrant worker leaves the country.

Should a migrant worker fail to leave the country once their contract is up, the construction firm is levied with a sizeable fine. The bonds the companies hand over to the government combined with the risk of facing fines has resulted in a profitable market for repatriation companies. Horror stories have also been reported detailing the expulsion of workers from Singapore should any health issues occur.

After he hurt his leg while carrying heavy tile, he pursued compensation through his employer. After being summoned to the foreman’s office, he encountered two large men who escorted him to the headquarters of a repatriation company. The company informed him he was being placed on a flight back to Bangladesh. Luckily, he was able to remember a lawyer’s assistant’s number and was provided assistance.

The issue of Singapore’s repatriation companies has even garnered the attention of the United States government. In its 2013 Report on Human Trafficking, it confirms the experience of Bapari and Shagar at the hands of repatriation companies. It notes instances of workers being “seized and confined” against their will and threatened into leaving the country.

While Singapore is a very modern and stable nation, it needs desperate reform of its labor laws concerning migrant workers; specifically the bonds the government requires from every firm employing migrant workers, which has created a market for these repatriation companies to flourish. Singapore experienced its first riot in 40 years involving disgruntled migrant workers; a clear sign that change is needed.