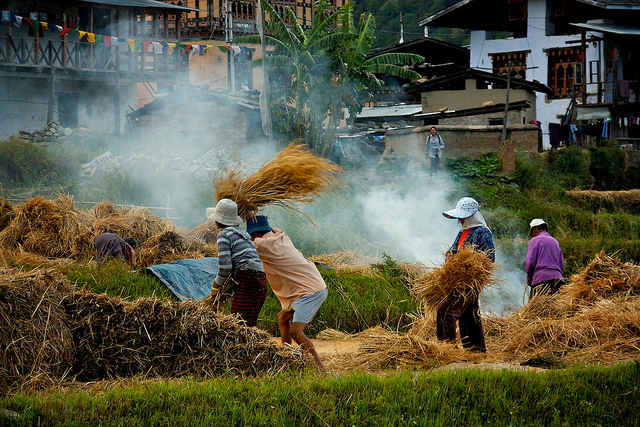 The Kingdom of Bhutan is a small sovereign state saddled between India and China, with an estimated population of less than 800,000. For hundreds of years, Bhutan existed in almost total isolation from the outside world. Upon King Jigme Wangchuck’s ascension to the throne in 1972, he began an ambitious program of modernization and reform that continues today. Despite much progress in poverty reduction, institutional development and new infrastructure, Bhutan still has a large number of poor, rural workers who lack credit access.

Microcredit: A Way Forward for Credit Access in Bhutan?

Since the 1970s, microfinance has — in best cases — transformed poor workers in developing countries into successful entrepreneurs making vital contributions to their local economies. By extending small lines of credit at low rates, microcredit lenders enable workers to invest in wealth-generating capital such as plows, stone ovens and weaving looms.

Microfinance has been slow to catch on in Bhutan owing to underdeveloped infrastructure and a lingering barter economy. A 2010 Institute of Microfinance report concluded that microfinance was then still a nascent form, but remained upbeat about its potential, stating “easy access to institutional credit is prerequisite to convert agriculture enterprise into profitable activity (sic).”

According to the report, only an estimated 20 percent of all Bhutanese farmers—and just 10 percent of small farmers—had access to credit in 2010. It also highlighted a number of challenges to expanding microcredit in Bhutan, such as a tendency for rural workers to trade in goods rather than currency.

The World Bank suggests that for microfinance to really take root, it has to operate within a larger context that includes favorable government policies, available technology—as well as sensitivity to the real needs of borrowers.

The effectiveness of microfinance in reducing poverty has increasingly come into question in recent years, but most studies suggest it still brings benefits when implemented correctly and with the correct motives. In addition to addressing the conditions necessary for effective microfinance operations, The World Bank emphasizes that credit rates must be subsidized below market levels to truly benefit poor borrowers— highlighting the role of government and non-profit organizations.

Despite overwhelming needs, microcredit options are few in Bhutan. An article by the International Finance Corporation concludes that lack of access to finance remains a key inhibitor of private investment and business growth.

As of 2013, there was only one national program offering microfinance options, but the Royal Government has shown willingness to facilitate increased levels of fair and profitable micro-financing. For instance, in 2016, Bhutan’s Royal Monetary Authority produced a set of guidelines for governing the conduct of micro-financial institutions that protect the interests of borrowers. It will, however, be a challenge for the government to enforce these regulations in rural areas where most economic activity goes unrecorded.

Bhutan’s rural population and underdeveloped transit infrastructure present additional obstacles to sustainable micro-finance. Bernd Baehr, Project Director of RENEW Microfinance—one of the largest NGO micro-financers operating in Bhutan—told Bhutanese media source, Kuensel, that, “micro-finance in Bhutan cannot be profitable unless the infrastructure and technology keep up with the pace of development.” To illustrate this, Baehr pointed to the vast inefficiencies resulting from field officers often having to have to drive for up to six hours to reach clients.

Considering these obstacles, the overall picture for Bhutan’s economic development looks positive. When the country’s per capita GDP was first recorded in 1961 it was the lowest in the world at just $52. Now, Bhutan’s per capita GDP is more than $3,000 and the economy is experiencing sustained annual growth of around seven percent.

By capitalizing on these gains, Bhutan’s Royal Government can establish the groundwork for sustainable future investments. Improving infrastructure and financial regulation, and incentivizing subsidized lending to poor, rural borrowers could begin to help poor workers access credit and secure essential capital to elevate them from serfdom and poverty.