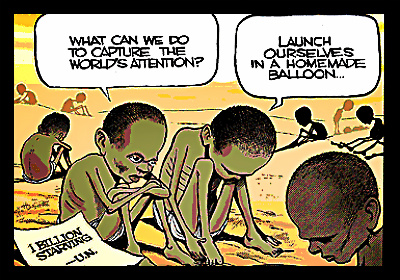 Many reports discuss the high and unacceptable rates of poverty in wealthy countries such as the United States, Australia and the United Kingdom. This can be confusing to readers when they think of images of people starving and dying of preventable conditions in the developing world. It is important to note that poverty in the developed world is very different in the developing world; therefore poverty means something different in the US than it does in does in the Democratic Republic of the Condo. Discussed below are terms frequently used to describe the different kinds of poverty: absolute, overall, and relative poverty.

In 1995 the United Nations defined absolute poverty as severe deprivation of basic human needs including food, shelter, safe drinking water, sanitation, healthcare, education, and access to information. This deprivation can either come from a lack of income or a lack of services.

The United Nations defined overall poverty as the lack of income or resources to avoid hunger or malnutrition, morbidity and mortality from illness, limited access to education, homelessness or inadequate housing, and social discrimination or exclusion. Overall poverty occurs in all countries, it is widespread in developing countries and is occurs in pockets in developed countries.

Relative poverty is defined in relation to the income or consumption of others in the same region. For example, a girl who attends a school where all the other teenagers own smartphones when her parents cannot afford to buy her a cell phone would be experiencing relative poverty; she is poor in relation to those around her.

In the same way, poverty lines can be determined using absolute or relative poverty.

Absolute poverty lines are based on absolute minimum standards of what families should be able to afford (either through income or services) in order to meet their basic needs. This is normally calculated by the amount needed to feed a family and cover basic necessities taking into account the cost-of-living in the area.

Here poverty can be measured in relation to the income of other members of the population, for example the poverty line may be an income that is less than 50% of the median income in the country. The OECD typically uses measures similar to this to measure poverty in developed countries.

It is argued that as large percentage of the population in developing countries are very poor and do not have the resources to meet their basic needs, poverty in these countries should be measured in absolute terms.

Therefore when reports are published on amount of poverty in the US it is important to remember that they are mostly likely talking about overall or relative poverty, whereas poverty in the developing world is often a mixture of overall and absolute poverty.