Tag Archive for: Rehabilitation And Resettlement 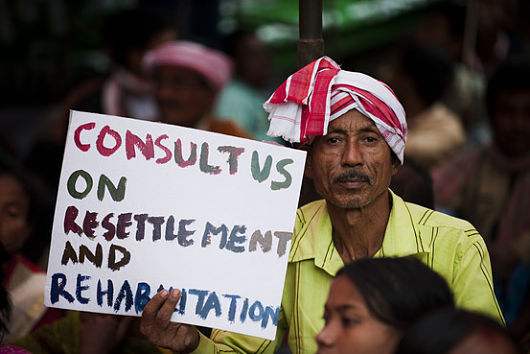 Last month, the President of India promulgated the controversial Right to Fair Compensation and Transparency in Land Acquisition, Rehabilitation and Resettlement (Amendment) Ordinance despite massive public opposition. This means that even though the bill outlining the amendments has not yet passed in India’s Upper House to legally become law, its content would still be enforced. Multiple farmer organizations have collectively filed a Public Interest Litigation (PIL) against the ordinance, labeling it as “unconstitutional” and an unchecked exercise of executive power.

The bill amends various aspects of the Right to Fair Compensation and Transparency in Land Acquisition, Rehabilitation and Resettlement Act of 2013, which replaced the colonial-era Land Acquisition Act of 1894. The aim of the amendments is to facilitate development projects with greater ease by expediting land acquisition.

But many argue that the amendments violate property rights of vulnerable communities and risk exacerbating economic and social woes. While the 2013 Act made the consent of at least 70-80% of landowners mandatory for a project to be carried out, the new amendments no longer require any level of consent for projects that are for national security and defense, rural infrastructure, social infrastructure, industrial corridors and housing for the poor.

The amendments also no longer mandate a Social Impact Assessment (SIA) to be carried out for these five types of projects or any Public-Private Partnership (PPP) project if the government owns the land. Opponents of the amendment fear that the categories exempt from the consent and SIA requirements are so broad that nearly all land development projects can be carried out without them.

The new amendments also weaken the previous Act’s provision that decreed land be returned to its original owners if it remained unused for more than five years after its purchase. As a report of the Comptroller and Auditor-General of India on Special Economic Zones found last November, land in India is often left undeveloped for long periods of time.

Opponents also criticize the amendments for increasing government officials’ immunity against prosecution. In the old Act, the head of the department that carried out the project would be responsible for any mismanagement or wrongdoing. Now, the head of the department and other civil servants are protected from prosecution until the government gives courts its permission to proceed.

The Modi government, which is behind the amendments, has defended them by asserting that they will attract foreign investors. Land acquisition laws for foreign companies have been riddled with red tape and slow bureaucracy. The World Bank rates India 142 out of 189 economies for ease of doing business. Many companies have dropped their investment plans after just a few years because of these impediments.

But lingering concerns remain about the government’s ability to carry out any provision of either the 2013 Act or its amendments. Indian bureaucracy is riddled with corruption, impunity and mismanagement. An estimated 75% of displaced people since 1951 are still awaiting rehabilitation. Many have not been given their due compensation.