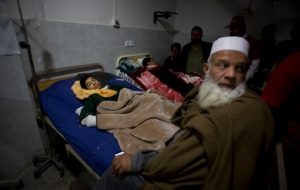 The city of Peshawar, Pakistan mourns deeply in the wake of the Pakistani Taliban’s deadliest attack to date. An estimated 132 children and nine staff members were killed in a devastating massacre targeting a school in the northwest region, where gunmen and suicide bombers inflicted damage so horrific that even the Afghani Taliban have condemned their actions. Most of the victims were children of military families enrolled at Peshawar’s Army Public School.

On Wednesday, the Pakistani Army pointedly allowed numerous television crews to enter the school grounds, where they were able to observe the crime scene for themselves and broadcast those observations back to their respective audiences. Images captured by international news teams revealed the devastating extent of the brutality, showing classroom floors coated with blood, walls covered in hundreds of bullet holes, and rooms blown apart by suicide bombers.

The international community has collectively vocalized utter contempt over the massacre, and Pakistan was immediately consumed by a state of national outrage. Prime Minister Nawaz Sharif responded by declaring three full days of mourning and announcing an abrupt end to the moratorium on the death penalty for terrorist actions.

This decision by Sharif is quite significant given the country’s past responses to terrorist groups. Despite the fact that terrorism in Pakistan has taken more than 50,000 lives since 2001, there has long existed a puzzling lack of a national consensus to fight terrorism. In the immediate aftermath of Tuesday’s massacre, politicians refrained from publicly declaring whether they thought the Taliban had been behind the attack, even though the Tehreek-e-Taiban Pakistan, or TTP, had quickly claimed responsibility. The militants describe the Peshawar disaster as an act of revenge for an army attack that they claim killed approximately 1,000 of their own people.

The Taliban has a lengthy history of attacking schools. As an extremist group that first emerged in northern Pakistan in the early 1990s, the Taliban wields its own version of Islamic law as a major justification for and motivation behind its actions. The Pakistani Taliban adamantly opposes Western education for children, especially for girls. Education activists in Pakistan claim that this opposition is the Taliban’s way of trying to exert control over the population by keeping young people in the intellectual dark. An educated girl or boy represents a threat in the eyes of the Taliban, and the terrorist group actively works to eliminate these perceived threats through violence and oppression.

The Peshawar school massacre represents a departure from the Taliban’s usual school attacks. Militants in the past typically attacked schools while they were empty at night, specifically hoping to have the institutions shut down rather than directly harm students. The Taliban has also tried to threaten Pakistan’s education system by intimidating teachers and pressuring parents to quit sending their kids to class.

Some are beginning to question whether the Peshawar attack will force Pakistan to decidedly confront the terrorist group in a way it has generally refrained from doing in the past. Pakistan has long held an ambiguous view of Taliban militants, a phenomenon known as “good Taliban” and “bad Taliban” that for the past decade has baffled the Pakistani public and sent terribly mixed messages to the West. In the wake of the attack, Prime Minister Nawaz Sharif announced “there will be no differentiation between ‘good’ and ‘bad’ Taliban,” while acting foreign minister Sartaj Aziz has described the tragedy as “our 9/11” and a “game changer.”