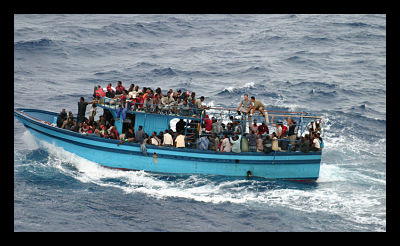 Thousands of refugees attempt entry into the European Union by crossing the Mediterranean Sea using unstable equipment, driven by their desperate seeking of asylum. Within the first months of 2014, over 500 refugees have died on this trek, a number that enrages many leaders within the EU.

Few of the 28 states that comprise the EU allow more than a few thousand refugees. Some countries demonstrate extreme generosity, however, “Today around half of the (EU) countries have said that they would engage in resettlement from Syria. I think all 28 (EU member states) should,” says an EU official.

To date, Europe has accepted a mere 100,000 refugees from the three-year-long civil war conflict in Syria in comparison to Syria’s neighbors where over three million displaced people have found safety and solace.

Should the EU provide faster approval and more open regulations for refugees, events such as the discovery of 30 deceased refugees in the middle of the Mediterranean could be prevented. This horrific finding left much of the EU dismayed. Prior to the finding, many were unaware of the need.

EU Home Affairs Commissioner Cecilia Malmstrom spoke openly about the increasing number of people in need, announced at a news conference that the “European Asylum Support Office (EASO), which said the number of people applying for asylum in the EU rose 30 percent to 435,760 in 2013, the highest figure since the EU began collecting data in 2008,” drawing attention to the problem many EU officials have slid under the rug for many years. The rapid increase demonstrates the necessity for EU members to alter their refugee application processing procedures.

Malmstrom goes on to acknowledge, “we have in our immediate neighborhood a very worrying situation, in Syria of course, Iraq, Ukraine and several parts of North Africa.” He voices concern for areas of conflict that the EU could potentially intervene in should refugee applications be accepted.

Countries like Syria and Russia sit atop the list with the highest entry requests to the EU, Syria sending in 50,495 applications and Russia with around 41,000 pleas for help. Both countries experience severe demonstrations of lack of human rights, Syrians and Russians are among many who search for the same open door.

By the end of 2013, there were over 352,000 people awaiting answers from the EU regarding entry. In order to tackle the human rights violations occurring in multiple areas, the EU must attend to these people and offer them the safety they cannot find elsewhere.