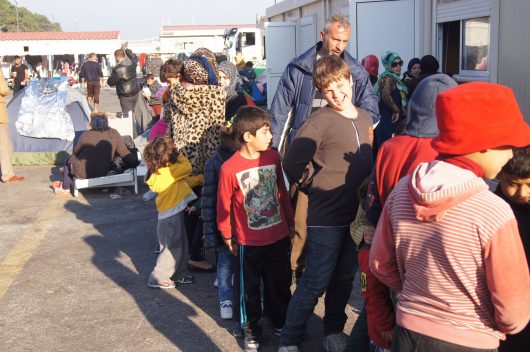 An estimated 57,000 refugees are currently stuck in a midpoint stage in Greece — halfway between where they once were and to where they’re trying to get. Many refugees in Greece are living in what are known as “squats” with the help of local activists and other refugees.

There are seven major squats in the city of Athens where approximately 1,500 refugees have found an alternative to government camps that have extensive health and safety problems. Because government camps suffered from things such as scabies, knife fights, food poisoning, inadequate facilities, snakes and scorpions, local activists and refugees worked together to house the refugees in abandoned schools, hotels, apartment buildings and hospitals — or squats.

As many as 1,000 refugees per day were able to be smuggled by mafias on rafts, but since Macedonia, Hungary and Bulgaria built razor-wire fences along their southern borders, refugees cannot access the Eastern Mediterranean route. Now the flow of refugees has come to a halt; however, the refugees who were already en route to Europe when the EU made its deal with Turkey in March 2016 are confined within the borders of Greece and the Greek islands.

Refugees in Greece, who believed they would only be spending a season in the country, now have to make a life for themselves in Greece. With the help of volunteers, activists and other refugees, this is altogether possible for the refugees living in squats. There are a wide variety of volunteers assisting in different ways. Volunteers and refugees help with cooking, cleaning, translating and securing the area; providing language lessons, art classes and activities for children; and organizing group outings.

The success of the squats has been achieved autonomously, with no help from government aid and without donations from large nongovernment organizations — the squats only accept donations and assistance from independent volunteers, which are used to pay bills for electricity, water, food and medical supplies. These volunteers have made these squats a home for refugees, each squat having a distinct character that suits the residents.

Unfortunately, these squats are in danger of being shut down by the government due to public health risks. Squats in Thessaloniki have been closed, which resulted in a large number of homeless refugees living on the streets. The shutting down of squats places more pressure on those that are still running and the volunteers running them.

With the help of more donations and assistance, these squats can improve their conditions and continue to serve the needs of refugees. Refugees in Greece are not living in adequate conditions within government camps, and therefore, squats have been produced to provide a home and a loving community to the refugees.