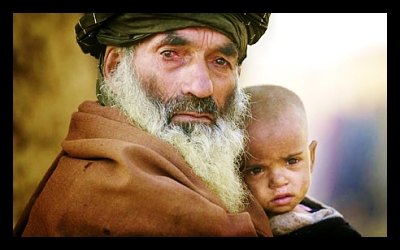 An estimated 15.2 million people in the world are refugees, people forced to leave their home countries because of persecution, war, or other kinds of violence. That’s the equivalent of the populations of New York, Los Angeles, Chicago, and San Francisco combined.

Who are these people? Where do they come from? And where do they currently reside? Data from the United Nations High Commissioner for Refugees give us the following snapshot of these populations: of the 15.2 million refugees, 46% are under 18, and 48% are female. Most of these people have been forced to move to developing nations, which host an estimated 80% of the world’s refugee population.

The country with the largest refugee population in the world is Pakistan, which hosts an estimated 1.7 million refugees. Many of these refugees are from neighboring Afghanistan, the country that produces the greatest number of refugees, an estimated 2.7 million people. To place these numbers in a global context, below is a list of the world’s top 5 largest refugee populations by the nation of origin.

Refugees from these and other countries are forced to move across the globe, many of them ending up in Pakistan, Iran, Syria, Germany, and Jordan, the top 5 on the list of host countries. Jordan, Syria, Congo, Chad, and Montenegro are the countries with the highest proportion of refugees per 1,000 people. The United States currently hosts an estimated 265,000 refugees.

Although numbers like these are sometimes hard to grasp, compiling this kind of data is vital for refugee aid organizations like UNHCR, which rely on data to plan ways to help the people and countries involved. UNHCR publishes an annual Global Trends Report on refugee populations. The next such report is due in June 2013.