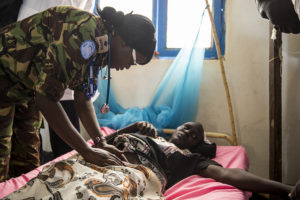 Refrigerator vaccines in South Sudan are being implemented at a fast rate. In the past, the country has struggled to vaccinate because of the difficulty of accessing a large number of small villages located throughout the country, as well as adjusting to low rates of electricity. Thankfully, distributing vaccines in airtight refrigerators has helped the vaccination efforts tremendously.

The refrigerators used to transport vaccines are crucial to what’s called a “cold chain” — a temperature-controlled supply line that protects the medicine. Vaccines must be kept at near-freezing temperatures when transported. UNICEF health workers store thousands of small vaccine bottles in the refrigerators which are then distributed to mothers and small children to combat diseases such as measles, polio and tetanus.

Health workers then maintain the cold chain to remote villages by using styrofoam boxes and ice packs to sustain the vaccines for another seven days, reaching people who live far away from medical facilities. The ability for vaccines to be transported by cold chain saves thousands of lives of people who wouldn’t normally have access to vaccinations.

To maintain the cold chain to remote villages, health workers use styrofoam boxes and ice packs that can safely store the vaccines. It is quite the journey to transport his refrigerators to Kenya where they are dispersed. The vaccines are manufactured in Germany and need to be transported by ship through the Suez Canal to Mombasa, Kenya.

The vaccines are then transported by truck from Juba and Wau, a process that can take up to two weeks during the rainy season, as there are over 170 miles of unpaved roads in South Sudan, as well as places with no road access, to cover. There is also the possibility of conflict with drivers on the roads, making the job treacherous on many fronts. Since 2013, four drivers and one driving assistant lost their lives while delivering aid for UNICEF.

The Food and Agriculture Organization (FAO) collaborated with the national Ministry of Livestock and Fisheries Industry (MLFI) to help produce Refrigerator Vaccines in South Sudan to help cold chain supplies as well. The organizations more than tripled the number of functional vaccine refrigerators in 2015 from 42 to 160, including 102 solar direct-drive refrigerators and 16 electrical refrigerators and freezers. Over $1.2 million of cold chain equipment has been delivered by FAO through funding from the United States of America, United Kingdom, Norway, Denmark and Africa Solidarity Fund governments.

The World Health Organization (WHO) in partnership with UNICEF, state directors general for health and Expanded Program on Immunization (EPI) officers of all states met in January of 2017 to discuss how to reach 2.3 million people with measles vaccines. The groups discussed how to enhance the skills of key personnel in the areas of:

Refrigerator Vaccines in South Sudan have helped aid thousands of people against preventable diseases. The efforts of UNICEF, FAO and the South Sudan government should be applauded for their efforts.