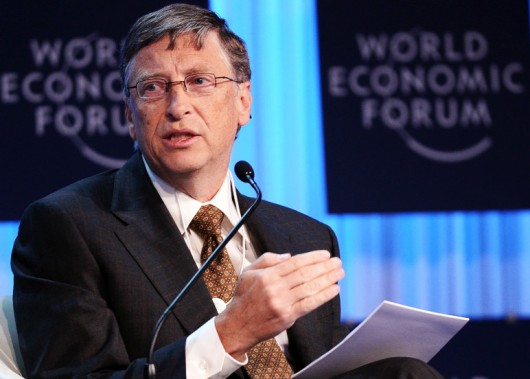 The Bill and Melinda Gates Foundation gave (RED), an organization that fights AIDS, the best 10th-anniversary gift ever: a $50 million match for all Global Fund donations in 2016.

The foundation announced its pledge at the 2016 World Economic Forum in Switzerland according to Look to the Stars.

(RED) and the Fight Against Aids

“Over the past decade, (RED) has enrolled millions of people and dozens of brands in the global fight against AIDS,” said Bill Gates, co-founder of the Bill & Melinda Gates Foundation, in a statement at the 2016 World Economic Forum.

“Today’s match will provide the Global Fund with up to $100 million to help save 60,000 lives, prevent 2.3 million new infections and generate more than $2 billion in economic gains for developing countries,” he said. “That’s an amazing return on investment.”

The Bill and Melinda Gates Foundation and the (RED) campaign has actively supported the Global Fund over the years.

Since its inception in 2006, (RED) has raised $350 million thanks to partners, events and products sold according to the organization’s website.

“We owe a debt of gratitude to all the companies, the creative collaborators and the activists who step-up to fight AIDS with (RED),” said (RED) CEO Deborah Dugan in a statement in January 2016.

A portion of the profits from (RED) branded products, like Beats by Dr. Dre Solo 2 headphones, Apple iPods and GAP clothing, benefit the Global Fund to Fight AIDS, Tuberculosis and Malaria.

The Gates and the Global Fund

The Global Fund was established in 2002 to end AIDS, malaria and tuberculosis as epidemics through government, civil society and private sector partnerships according to its website.

“The Global Fund is one of the most effective ways we invest our money in every year,” said Bill Gates at the 2012 World Economic Forum. “By supporting the Global Fund, we can help to change the fortunes of the poorest countries in the world. I can’t think of more important work.”

The Bill and Melinda Gates Foundation and the (RED) campaign even partnered together through Snapchat in honor of World AIDS Day 2015.

Every time a user sent a Snapchat message using a (RED) filter, the Bill and Melinda Gates Foundation agreed to donate $3 to the organization’s fight against AIDS according to Re/code.