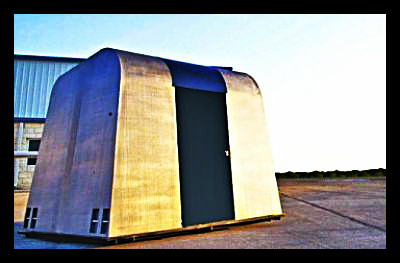 In the aftermath of Hurricane Katrina, hundreds of thousands of people and families were displaced. They were sheltered in football stadiums while the Federal Emergency Management Agency worked to respond to the disaster. Families were separated, shelter was inadequate and the infamous trailers that the government delivered as temporary housing were ineffective. While Hurricane Katrina was handled particularly poorly, this kind of scenario is typical of disaster relief. A coffee cup may have changed all that.

Inspired by a Coffee Cup

Michael McDaniel, founder and CEO of Reaction Housing, was disturbed by the way that disaster relief for Hurricane Katrina was handled. He wanted to find a new, better way to house refugees after disasters, and an upside-down coffee cup gave him the idea of where to start.

The Exo Housing Unit is a simple structure consisting of two parts, an upper domed shell and a lower flooring unit. The two pieces snap together, just like a disposable coffee cup and its lid.

Stats of the Exo

Also, unlike traditional trailers, Exo’s can be used repeatedly, or recycled to make material for new units.

The Exo is strong and light with the bottom shell made up of birch and steel, and the upper composed of Tegris, a durable aircraft-grade aluminum composite material.

Altogether, each unit weighs about 400 pounds, meaning that four adults can easily set them up without any power tools in under five minutes.

Additionally, the Exo’s design makes it stackable, meaning that it can be easily transported in bulk, making more units accessible to disaster sites more quickly.

One of the most traumatizing consequences of a natural disaster is being separated from family and friends. The design of the Exo allows for units to be placed in any kind of configuration, even attaching in a straight line for larger families and neighborhood units.

The software included in the Exo makes them far safer than traditional disaster housing as well. Their digital locks provide protection from the outside, and the units are remotely monitored for temperature, making fire detection and prevention far more feasible.

The units are also wired for electricity, giving people the ability to keep electronics charged, keeping them in touch with family and friends outside the disaster zone.

Bringing Exo to the World

So far, Reaction Housing has raised around $1.5 million from donations and investors. This amount is enough to generate a core team and start up a manufacturing and supply chain. With prototypes already being manufactured, the next step is to raise the money for production. In fact, Reaction’s goal is to have those funds raised in a year at the latest. Demand is already coming in for Exo Housing Units, and rather than ignoring the people who need assistance now, Reaction plans to send out a number of prototypes.

The company has set up an Indiegogo campaign and has already exceeded its $50,000 goal. The campaign will remain open to donations until April 3, before the prototypes will be sent out on their test trials.

While there are still hurdles to jump, with proper funding, the Exo may be a huge part of disaster relief in the near future.