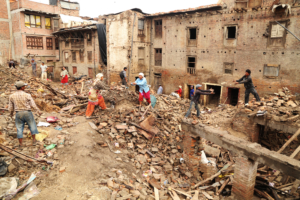 Nepal sits between two very seismically active tectonic plates that span the length of the Himalayan mountain range. In the 20th-century and again in the early 21st century, devastating earthquakes prompted the Nepali government to create programs that prepare the Nepali people for possible earthquake situations. International organizations were also present and significantly aided earthquake preparedness in Nepal. The development of technological programs that maintain the tracking of people during a panic has made an enormous difference in the way first responders find and rescue people during natural disasters. To keep people safe, it is necessary to have earthquake preparedness programs in place.

The Nepali government created the Kathmandu Valley Earthquake Risk Management Project (KVERMP) in 1997 as an earthquake preparedness initiative. This project instituted an earthquake scenario program that simulated an emergency situation and assigned specific roles to various actors in the towns. A branch of KVERMP includes the School Earthquake Safety Program (SESP). This program provided funding to schools so students could practice earthquake safety drills and masons received training to make the school buildings more resilient. Community members also received safety information along with risk-prevention advice from professionals. Another notable achievement of the KVERMP was the creation of Earthquake Safety Day, which is to promote awareness and normalize new earthquake preparedness safety methods.

The Study on Earthquake Disaster Mitigation of Kathmandu Valley (SEDM) was a study that the Nepalese government initiated in conjunction with the Japan International Cooperation Agency to increase earthquake preparedness in the country. The goal of SEDM was to assess the possible outcomes of major earthquakes in relation to resources, infrastructure and aid. The parties involved suggested various policy changes and committee formations to further promote earthquake preparedness. Most notably, the group suggested the establishment of a National Disaster Council and recommended that the government put a higher priority on policy relating to disaster preparation and mitigation and implement a disaster management plan in each level of government.

When people in the 21st-century talk about earthquakes in Nepal, they are most likely referring to the April 2015 earthquake near Kathmandu. The magnitude 7.8 quake, also known as the Gorkha earthquake, killed about 9,000 people and injured around 25,000 more. The earthquake was so powerful, that Bangladesh, China and India could feel it and the devastation prompted response crews from all over the world to sift through more than 600,000 damaged structures. These aftershocks led to international organizations partnering with the Nepali government to reconstruct the damaged infrastructure using sustainable tactics. This relief effort built upon the earthquake preparedness that Nepal already put in place.

Nepal’s Ministry of Science, Technology, and Environment wrote a document entitled, Rapid Environmental Assessment (REA), outlining the issues that the 2015 earthquake caused and the frameworks to fix them. Topics that the report covered included damaged water and sanitation facilities, agricultural impacts, education and more. Taking preventative action, such as changing toilet construction methods, should allow for faster reconstruction and less waste containment issues in the case of an earthquake. Among the multitudes of topics the document covers, another example is sustainable land use. Landslides that were dormant for years became free during the earthquake. This is partly due to the misuse of land and tree removal. The REA is calling for the revision of land-use laws and the enforcement of policies.

Earthquake preparedness comes in many forms. In response to various earthquakes around the world, a nonprofit organization called Flowminder created a population tracking program. Rescue crews use the technology to pinpoint the location of endangered civilians in a timely manner. Utilizing mobile phone data, satellite images and census data, the program analyzes the information and then sends the data to organizations in the midst of disasters. Organizations involved in relief efforts following the 2010 Haiti earthquake used similar programs, so the technology does work. Governments and first responders often struggle to find people in the dynamic aftermath of a crisis. Nepal would have an easier time finding and helping citizens with this sort of technology.

During the Gorkha earthquake, hospitals remained open and functional due to the earthquake preparedness technique of retrofitting. The World Health Organization (WHO) praised the Kathmandu hospital for working diligently to fill cracks and holes as they appeared on walls. The process of retrofitting has been a long-term campaign of the WHO in efforts to promote earthquake preparedness in the health sector. While thousands of other buildings collapsed, the hospital was able to continue to care for patients. The hospital also cited an emergency preparedness plan for the staff’s ability to respond quickly to the crisis. The plan ensured that everyone knew where to go and what to expect after the earthquake hit.

In the immediate aftermath of the earthquake in 2015, USAID trained over 900 locals to build earthquake-resistant buildings. In the years after, the organization trained thousands more to help in the effort. The only way to prevent widespread infrastructure devastation is to take every precaution possible so that structures do not fall. USAID also encouraged the construction of seven deep wells in Kathmandu to ensure clean water in case of a natural disaster. Another project working towards earthquake preparedness involved the development of 12 “relief material” warehouses throughout Nepal in case of emergency. The idea was to stockpile supplies before a disaster occurred, allowing relief agencies sufficient amounts of resources to reduce the negative impacts of earthquakes. USAID has been instrumental in the long recovery since 2015 and preventing similar results from the next earthquake.

The final instance of earthquake preparedness in Nepal is the protection of open spaces. During crises like earthquakes, it is important for first responders and humanitarians to have a place to set up. The urbanization of Nepal has endangered these open spaces and the 2018 National Policy for Disaster Risk Reduction saw this as a threat to optimal earthquake preparedness. As a result, the planners decided to focus attention on the preservation of urban parks. The International Organization for Migration claims that 83 of the 123 parks in the Kathmandu area are at risk for infringement. However, various groups are actively working to protect those open spaces.