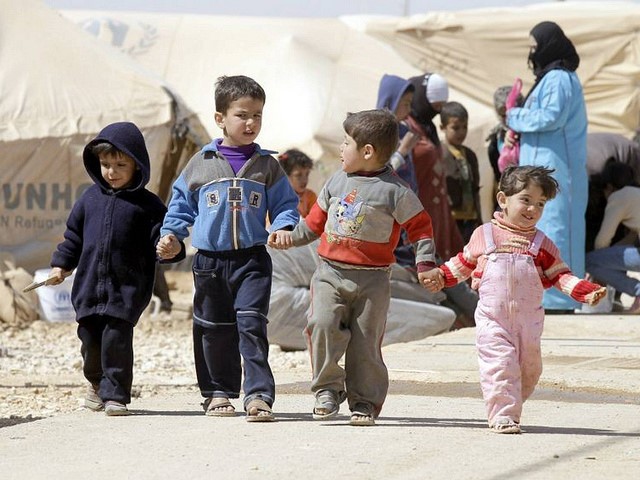 Trapped in a civil war-torn country, children in Syria are impacted greatly with little to brighten their days. One man, Rami Adham, has been trying to change that, by smuggling toys into Syria to these children as a way to bring some happiness to their lives.

Dubbed the “Toy Smuggler of Aleppo,”Adham is a 44-year-old Finnish-Syrian and father of six who moved to Finland from Syria in 1989. Aleppo is his hometown.

Since the civil war in Syria began, Adham has spent his time traveling to Syria through Turkey to better the lives of children in Syria. He has now traveled to Syria 28 times in the past five years, each time bringing with him over 80 kilograms of donated toys and smuggling them into Syria.

In an interview with Syria Direct, Adham explained that the inspiration behind bringing toys with him over the border is his daughter, Yasmeen. As Adham prepared for the first trip to Syria as part of his campaign in 2012, Yasmeen collected a bag of toys, weighing about 30 kilograms, and gave them to her father to hand out to children in Syria. Enamored with his daughter’s idea, he decided to bring an additional 100 toys that first trip and has continued smuggling toys over the border since then.

In addition to bringing toys over the Turkey border and into Syria, Adham also brings with him medicines, food and more from the money that he had raised in Finland through the charity he founded in 2012, the Finland Syria Association.

Prior to his charitable efforts, Adham was an underwater engineer, but when the civil war broke out in Syria, he focused all his time on his campaign in Syria as well as his charity, which is comprised of Syrian and Finnish volunteers.

Although he has recruited a dedicated team of volunteers to help him with his efforts, he is the only one able to enter Syria, so he solely takes on the most dangerous part of the work. He described to Syria Direct that since Turkey has shut down their border into Syria, the task has become harder. He now must take the same route that refugees take, which he has done 12 times.

It may seem that risking his life numerous times is the ultimate act of generosity, but Adham continues to think larger with his campaign.

According to the Independent, in August 2016, he started a GoFundMe fundraising campaign to collect money from donors to build schools in Syria near the Turkish border and away from Russian and Syrian air strikes and rebel-held areas.

Just a month after setting up his GoFundMe website, Adham has raised nearly $70,000. And, during his most recent trip to Aleppo in late September, he began the framework for building a new high school at a refugee camp.

In a press release from Sept. 28, UNICEF Deputy Executive Director Justin Forsyth put it plainly that “the children of Aleppo are trapped in a living nightmare,” and although they are continually at risk, the work of Adham is a light among the darkness for many children in Syria.