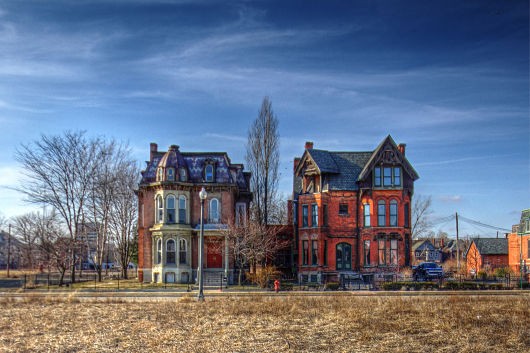 The United States has traditionally been known as the land of opportunity. Freedom and equality are the pillars upon which our Western civilization rests. The belief that each individual is equal to the next is the driving reason for mass immigration over the past decades and the continued promotion of the American dream. Unfortunately, while the dreams of success are afforded equally to every citizen, the differences surrounding poverty and race are significant. Statistically, African Americans in poverty experience a much more difficult life than their white counterparts.

In an article published in the Washington Post, blogger Emily Badger analyzed the radical disparities between blacks and whites beneath the poverty line. A major point in her argument is how poverty is contained among each demographic. Badger points out that black families in poverty are far more likely to reside in neighborhoods in which the entire community is in poverty. These areas are usually closer to inner-city zones and have typically existed for decades.

The situation is made even more difficult by how these black families are often locked into these poor communities without a viable method of escape. An excerpt from Badger’s article reads, “We’ve designed communities to pen poverty in, restricting many poor African Americans in particular to a limited number of neighborhoods.” These poverty-stricken areas continue to exist with little to no improvement or reform.

Another part of Badger’s piece examines the reasons these poor black families are entrenched in these neighborhoods without escape. Badger writes, “Concentrated poverty is getting worse because poor people — especially poor African Americans — are increasingly left behind. And a number of forces drive this pattern, including systemic discrimination, policies that have historically concentrated public housing and modern zoning laws that keep the poor out of wealthier communities.” Whites, on the other hand, experience a vastly different life in poverty.

Whites in poverty are statistically located in suburban areas outside city limits with greater access to resources and aid. Also, many of these neighborhoods either refuse or fail to provide any form of social housing for people in poverty in general. By alienating themselves, whites in poverty create an unfair chasm in the experience of poverty. Our country prides itself on providing equality, but it fails to treat its impoverished citizens the same.