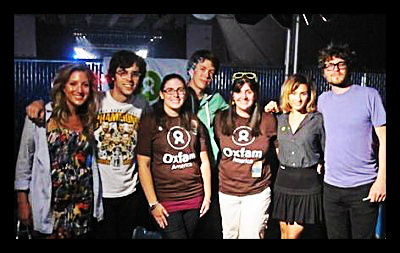 Unlike most musicians, indie rock band Ra Ra Riot endorses more than just good music and a rockstar lifestyle during their world tours.

Formed in 2006 at Syracuse University, Ra Ra Riot has included the humanitarian organization Oxfam International at their concerts since their earliest shows. Ra Ra Riot band members Rebecca Zeller and Mathieu Santos have spoken openly in support of Oxfam’s mission to end poverty, hunger, and injustice across the globe, saying that they believe it is important to connect the cause to their music.

But allowing for tabling at concerts isn’t the only way that Ra Ra Riot shows its support for Oxfam and alleviating global poverty. In 2011, the band partnered with streaming music service Songza to raise money for Oxfam. For each person that became a “fan” of the Ra Ra Riot music station, Songza donated $0.50 to Oxfam America.

The indie band has also held concerts, such as ThrillCall’s Launch Party with Lissy Trullie, where all ticket proceeds were donated to Oxfam. Recently, Oxfam America released its annual Summer Jams album, featuring artists such as Ra Ra Riot, Wilco, and Calexico to help raise awareness about their work.

Music brings people of all different backgrounds together and makes them feel connected to each other. Ra Ra Riot has not only brought their listeners together in support of their music, but also in support of the world’s poor. What more can be asked of a band?