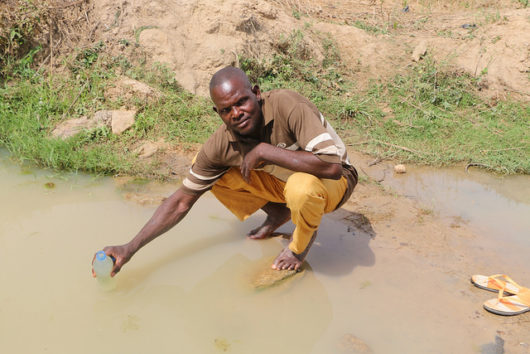 Access to safe water, sanitation and hygiene is a core necessity for human survival that a large portion of the world, especially developing countries, still struggle to meet.

In Nigeria, UNICEF reported that close to 70 million people, out of the total population of 171 million, lacked access to clean water, while 110 million lacked access to sanitation in 2013. The impact of this shortage is dire as 124,000 children under the age of five die because of diarrhea that is mainly caused by unsafe water, bad sanitation and bad hygiene. Moreover, it decreases school enrollment and disproportionately affects girls who bare the responsibility of carrying water. Finding the solution for Nigeria’s water quality is, therefore, a pressing issue that requires all responsible parties to participate.

Gbenga Ashiru, the producer of Question Time, a Nigerian news program that profiles the activities and accountability portfolio of office holders, discussed the reasons behind Africa’s largest economy reaching a peak in a shortage of potable water. He dissected what he states is the “mystery” behind the Nigerian government’s, led by the Minister of Water Resources, inability to meet water demands. Ashiru highlighted the extreme water shortage and listed the shocking statistics of potable water and sanitation coverage at 7 percent and 29 percent, respectively.

Four months ago, the Nigerian government launched the Nigerian Standard for Drinking Water Quality to revitalize the access to safe drinking water throughout the nation to achieve goal number six of the Sustainable Development Goals. At the launching ceremony, Suleiman Adamu, the Minister of Water Resources, asserted that finding the solution for Nigeria’s water quality issue is the current focus of President Muhammadu Buhari’s administration.

According to UNICEF, Nigeria has indeed taken the steps to improve this pertinent issue through the development of various policies and strategies. However, a deterioration in water quality and access portrayed by a 25 percent drop of pipe borne water supply since 1990, reveals the difficulty of translating the solution to Nigeria’s water quality issues into action.

Nigeria’s Water Act states that the Federal government of Nigeria funds 30 percent, local government funds 10 percent, while state government covers 60 percent of the funding of water projects along with the full responsibility of operation. Suleiman Adamu, in his interview with Ashiru, argues that the Water Act is neither feasible nor effective policy in meeting water and sanitation demands and calls for an amendment of this legislation as well as the gradual privatization of this sector.

Suleiman Adamu holds the state government responsible for not meeting their end of the bargain. He explains that even in cases where the federal government went beyond the 30 percent of the funding and invested in water treatment facilities, the states failed to carry out the operations. He argues that this happens due to state government officials neglecting pressing water demands that require long periods of gestation and focus on short-term projects to show results during re-election. Therefore, the solution for Nigeria’s water quality issues lies in finding the amendment of this policy that has created obstacles for the synergy in the federal, regional and local governments.

Since water projects are a primary responsibility of state government, bringing progress at a national scale requires synergy in state and federal government. The Minister explains that the federal government will work on achieving this collaboration through advocacy and offering supervision rather than simply giving funding without aligned priorities.