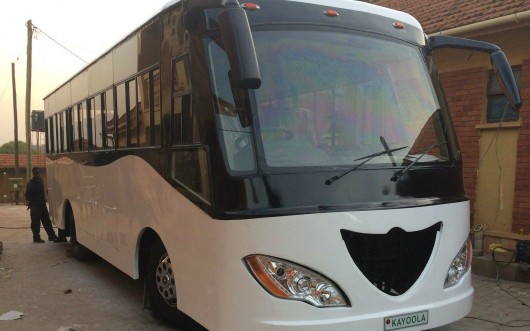 The Kayoola, this 35-passenger solar-powered bus, can run up to 80 kilometers (approximately 50 miles) on two power banks. According to BBC, the bus will primarily transport residents of urban areas due to its travel restrictions.

Kiira Motors Corporation (KMC) built the Kayoola prototype with funds provided by the Ugandan government. The bus houses solar thermal panels on its roof that can be used to recharge its power banks.

“Uganda being one of the 13 countries located along the equator, gives us about eight hours of significant solar energy that can be harvested,” said Paul Musasizi, CEO of KMC.

Musasizi predicts that 7,000 people will be employed either directly or indirectly in the building of the Kayoola by the year 2018.

A survey conducted by the Bureau of Business and Economic Research found that only eight to nine percent of American respondents owned alternative fuel cars in 2014 — and only five percent lived in homes with solar thermal panels.

Even though solar energy has yet to catch on in America, emerging market success suggests a growing interest in renewable energy.

The PEW Charitable Trusts reports that the solar industry led in all sectors of renewable energy, bringing $12 billion of total clean energy investments in the leading 10 markets from 2009 to 2013. The same report predicts an expected increase of 594 percent in the amount of installed renewable energy worldwide between 2012 and 2030.

“As we continue developing concepts, we are also studying the market. We want to see that we don’t make vehicles for stocking but for production on orders,” said Doreen Orishaba, an engineer of the project.

According to the PEW Charitable Trusts, only 26 percent of Kenya’s citizens have access to modern energy services. The developing world can thus benefit greatly from projects created via solar power, like the solar-powered bus that uses solar thermal electricity to generate power.