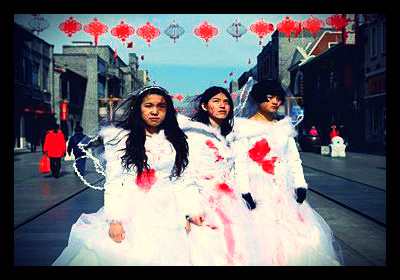 In an attempt to raise awareness about the overall inequality women in China face, various groups have been performing an assortment of “stunts” in the hopes to provoke a positive response in favor of feminism in China.

Within the past few years, displays have included women wearing wedding dresses covered in red in an effort to stand up to domestic violence, disapproving of the lack of female facilities by participating in “Occupy the Men’s Toilets” and shaving their heads to address the more demanding requirements women need to meet to attend college.

While feminism is not as widespread in China as some of these activists would like, it is by no means a new movement. In the 19th and 20th centuries, women such as Lin Zongsu fought for female suffrage and women such as Qiu Jin wrote and spoke out about the practice of footbinding and the limited education of young girls.

Li Mizai explains to a Guardian reporter that despite the plethora of past feminist figures the activists use for inspiration, “gender discrimination is getting worse.”

Only two women serve on the politiburo and “the proportion of women on the party’s 200-strong central committee has slipped to less than 5 percent, lower than in Mao’s day.” Less than a fifth of land use contacts are in or include the name of the wife, and in 2011 rights to marital property were legally reduced. Moreover, the percentage of urban working women has decreased from 77 percent to 61 percent in the past two decades.

Part of the discrimination starts at birth, and while the gender gap has decreased in the past two years, there are still 118 male births for every 100 female births.

Activists, however, have not been discouraged thus far, and keep advocating for women’s equality across the country by trying to make women recognize their right to advocate for themselves.