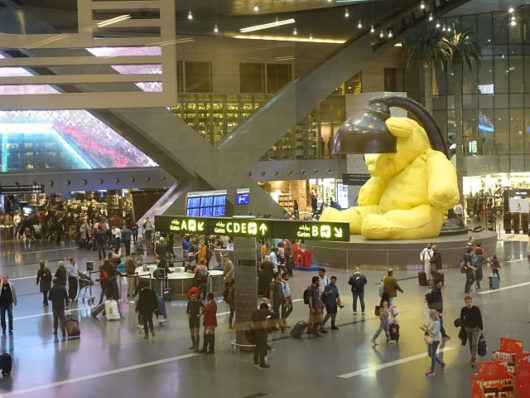 On June 4, 2017, the United Arab Emirates, Saudi Arabia and Bahrain severed diplomatic relations with its Gulf neighbor, Qatar, over the latter’s supposed support for terrorism abroad, as well as its close relationship with the Shi’a power of Iran.

BBC reported that the diplomatic crisis not only rocked Qatar’s stock market that lost about 10 percent of its market value in the first four weeks but also stunted the expansion of specific airline company- Qatar Airways. Indeed, in the immediate aftermath, Qatar Airways canceled flights to 18 regional cities and changed flight paths to other destinations due to airspace limitations.

The Impact of Qatar Airways on the Country

The crisis showed the importance of Qatar Airways as both an economic engine of its home country and a transporter of food and other vital resources. Since its founding in 1994, Qatar Airways has spurred its country’s economy, both directly and indirectly, in the following three ways described in detail below.

Doha’s Hamad International Airport connects Qatar with 150 destinations. To power its massive global operation, Qatar employs 40,000 professionals and as of 2016, it was the fastest growing airline in the world.

As Qatar’s only national airline, Qatar Airways also handles shipments of goods. The diplomatic crisis of 2017, for example, increased prices of elementary goods because Qatar Air Cargo had to take longer routes around restricted airspace.

By branding itself as a world-famous stopover destination, Qatar Airways has influenced Doha’s and country’s tourism increase, spurring economic growth in the process. Ever since 2015, passengers transiting through Doha can participate in the airline’s Discover Qatar, which allows passengers to visit landmarks, including museums, beaches and shopping malls, in Qatar.

These excursions do not only promote Doha’s visibility on the world stage, but also bring foreign money to Qatar’s businesses. Discover Qatar has numbers to back its success. In November 2017, the program hosted 80 leading trade partners. According to Gulf Times, the delegation of trade partners visited the Katara Cultural Village, the Museum of Islamic Art and the stadiums that will host the 2022 World Cup.

Qatar’s emergence as a trade center has prompted its national airline to ease visa restrictions. In Sept. 2016, Qatar Airways worked with the Ministry of Interior to expedite the process for receiving visas, creating an online platform for issuing e-visas. Later in 2017, Qatar launched a free, 96-hour transit visa and extended a visa waiver policy to more than 80 countries. These visa initiatives resulted in an increase of 40,000 visitors in the fourth quarter of 2016.

The airline has funneled its profits to charitable purposes, both inside Qatar and globally. In 2013, Qatar Airways partnered with Educate a Child, a program that provides primary education to out-of-school children. During the Muslim holiday of Eid al-Adha, Qatar Airways partnered with Qatar Charity to deliver toys for 800 orphans in the Children’s Living Center in the Reyhanli province of Hatay, Turkey.

While booking their itineraries on Qatar Airways’ website, travelers have the option of making donations to educational organizations, with donation sizes ranging from $1 to $50. In November 2014, Qatar Airways raised approximately $700,000 to Educate a Child.

The nagging question is whether these subsidies are sustainable in the long run and if the Qatari government will always have money to invest in its airline’s success.

The status quo gives a reason for optimism, with the 2022 Qatar World Cup and Qatar Airways’ aggressive expansion into new markets showing the Gulf state’s promise for the future.