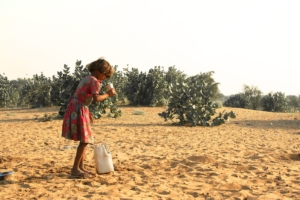 The desert is an ecosystem that does not have adequate moisture and nutrients to grow food. People living in these areas often rely heavily on food imports because of this lack of fertile soil. Approximately 5 percent of land in the Middle East and North Africa regions has sufficient amounts of water. That small amount of viable land has suffered mismanagement, resulting in shortages and limitations in agricultural regrowth after natural disasters and war. Fortunately, scientists and organizations around the world are developing ways to boost food security in the desert. Luckily, there are two programs in Syria and the United Arab Emirates that are attempting to feed people in arid regions.

The prolonged war in Syria has destroyed the once-booming agricultural industry, diminishing food security in the desert. Since the beginning of the conflict in 2011, the Food and Agriculture Organization of the United Nations (FAO) estimated the loss of the agricultural exports sector to be around $16 billion. This number does not include the destruction of fertile land and crops that fed the people of Syria.

British scientists brought green technologies to Syrian refugee camps to promote food security in the desert. Through these programs, refugees learn how to grow crops where fertilized soil is not available. This process uses recycled materials like mattresses; another process uses an indoor planting technique called hydroponics. Hydroponics is a growing technique that uses nutrient-rich water mixtures instead of soil to grow fruits and vegetables.

These projects allow people in refugee camps to become self-sufficient in terms of agriculture. Individuals can use these skills for future gardening and farming once resettled. The project has taught almost 1,000 people sustainable agriculture practices such as growing tomatoes, eggplants and peppers in refugee camps. Using technologies to grow vegetables in places with infertile land will help individuals and countries develop sustainability.

The United Arab Emirates has a climate of severe heat. The high temperatures and harsh conditions present serious issues for conventional farming methods. Due to this extreme climate, the country imports roughly 80 percent of the total amount of food consumed. The emergence of sustainable and innovative agriculture occurred from the need for alternative farming methods.

Pure Harvest began the pursuit of climate-controlled hydroponic greenhouses in 2016. This company aims to help the UAE become more self-sufficient in the government’s efforts to improve food security in the desert. In 2018, the company’s soccer field-sized facility in the Abu Dhabi desert produced its first tomato plants. Since then, it has produced approximately two tons of tomatoes per day.

The success of the first greenhouse has gained positive attention around the world. More desert communities are interested in building greenhouses to increase food security in the desert. Not only do these greenhouses allow crops to grow in arid parts of the world, but they are also producing enough of a surplus to create an agricultural market economy to the desert.