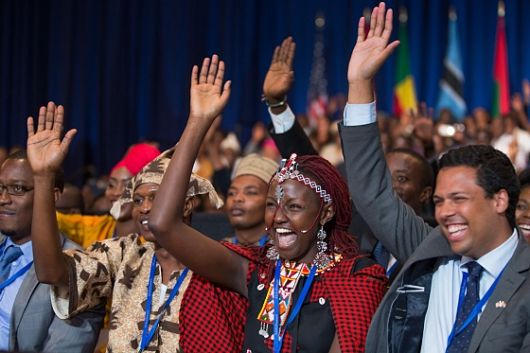 The Young African Leaders Initiative (YALI) is the combined efforts of the U.S. government, Non-Governmental Organizations, universities and companies to support African youth and future leaders in hopes of creating a better future for Africa as a whole. It was established by President Obama in 2010.

Not only does YALI aim to create and shape African leaders, but it also wants to create a network between them. What is striking about this measure is that it lays down a framework for these future leaders who are full of potential, but then leaves the more substantial and meaningful portion of the work to the young leaders themselves, leaving it up to them to shape their world.

YALI goes about this goal in several ways. For example, it offers online courses for individuals who want to learn more about areas such as entrepreneurship, leadership and public management. Completion of a YALI course not only means that a person has learned about honing valuable life skills, but also that they receive a certificate to prove it.

YALI is also working to construct Regional Leadership Centers throughout Africa with the intent of increasing accessibility and relevance of training programs to leaders and future leaders across Africa. Two have opened so far this year, in Accra and Nairobi, and two more are planned for Dakar and Pretoria by the end of 2015.

The YALI Network face2face is a Facebook group that helps young African leaders share events encouraging leadership and fellowship, or even create new skills. Members are encouraged not only to attend events but to create their own on topics that interest them or that would be beneficial to their particular community. It’s a tool to help create and maintain connections.

Another huge event put on by the group is the Mandela Washington Fellowship for Young African Leaders, which brought 500 African leaders ages 25 to 35 to the United States in 2014 and 2015. Fellows take academic courses in business, civic engagement and public administration and receive leadership training. Some also participate in internships. What they take home is access to new opportunities, seed funding and useful skill sets to help build their own communities.

Participants in the fellowship are selected from almost 50,000 applicants. Next year, there are plans to double the number of participants to 1,000, as well as to develop an exchange program where 80 Americans are sent to Africa to work with alumni of the fellowship program.

Each applicant has his or her own story and set of experiences that make them valuable contributors to the fellowship. For example, Grace Alache Jerry, Miss Wheelchair Nigeria, is a spokesperson for people with disabilities, founder of her own nonprofit organization and organizer of a series of benefit concerts.

Eldine Chilembo is an advocate for women’s empowerment in the maritime industry in Angola. Noluthando Duma helps orphans in her South African Province of KwaZulu Natal and hopes to develop a home to provide resources to such children.

Kenyan Kezy Mukiri said of her experience in the fellowship, “What I’m taking back with me is humanity. We need to connect; the world is becoming a global village.”

The bringing together of such inspired, dedicated minds is an undoubtedly noble cause. President Obama summed up the goal of the movement nicely at his speech at this year’s Washington Summit.