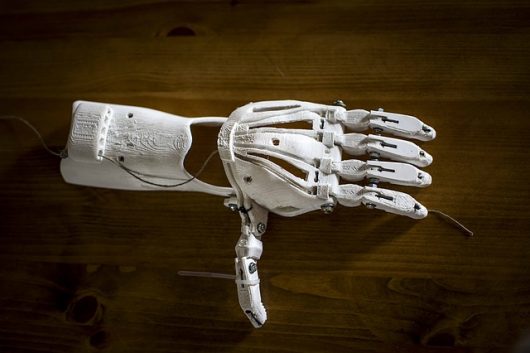 Companies have started using 3-D printing technologies to create prosthetic limbs for amputees in developing and war-torn countries. The loss or congenital absence of limbs is prevalent in many third-world nations. Reasons for this, according to The Guardian, include war, disease and random accidents.

Amputations are an especially heavy burden in cultures based around agriculture. An inability to farm leads to causes families to provide support for amputees, a heavy burden for those already poverty-stricken.

Typical prosthetics are incredibly expensive for citizens. Many of them can run up to thousands of pounds, according to The Guardian. 3-D-printed prosthetic limbs, however, are much cheaper. In fact, the cost of acquiring one is sometimes as little as 40 pounds.

Regular prosthetics also take a significant amount of time to make. The Guardian estimates that the process of measuring a prosthetic for the right fit, building a mold and getting amputees used to prosthetic can take up to a week.

However, turnaround times for the 3-D-printed prosthetic limbs streamlines this process. TRT World explains how scanners can take an amputee’s measurements in minutes, reducing the construction of 3-D limbs to several hours.

3-D-printed prosthetic limbs are also convenient for child amputees because they are still growing. According to TRT World, prosthetic limbs have to accommodate for children getting taller and gaining and losing weight. 3-D models can be sized and adjusted for the patients’ particular necessities.

Another appeal specifically towards children is the variety of appearances that 3-D-printed limbs can take. The limbs often come in many different colors and designs. For example, the Cyborg Beast prosthetic hand designed by Jorge Zuniga is created specifically to look like a robot for the enjoyment of children.

However, 3-D-printed prosthetic limbs are not without their faults. According to The Guardian, the prosthetics are often too heavy to maneuver, and they can melt in high temperatures.

Regardless, 3-D printing technology is improving. Companies Po and Thalmic Labs, for example, have created the MyPo, which uses 3-D-printed prosthetic limbs and muscle and nerve-reading technology to simulate the movement of natural limbs.

In spite of their shortcomings, the technological advances show that 3-D-printed prosthetic limbs are worth the investment of time and resources. The World Health Organization estimates that about 30 million people are in need of a prosthesis, but in many developing countries, less than 10 percent of those who require assistive devices and technologies have access to them. Braces and artificial limbs are among the most desperately needed medical devices. This shortage is due to a lack of expertise to produce and fit prosthetics in developing countries, as well as the time and financial cost to patients. Recent advances in 3D-printed prosthetic limbs might provide a solution to this problem.

Disability is an important developmental issue because people with disabilities experience grim socioeconomic outcomes and poverty as they face extra barriers to healthcare, education, and employment. Without prosthetics, those that have lost limbs due to war, accidents or disease are entirely reliant on others for survival.

This is an especially pressing issue due to the recent spike in the use of landmines in several war-torn countries. Stepping on a landmine invariably causes foot and leg injuries, and secondary infections usually result in amputations. A report by the International Campaign to Ban Landmines found that in 2016, global landmine casualties were at a 10-year high, and funding for landmine clearance campaigns was at a 10-year low. While the Mine Ban Treaty banned the use of antipersonnel mines in 1999, armed conflicts in Afghanistan, Iraq, Libya, Syria, Ukraine, and Yemen contributed to a sharp spike in the number of people killed and injured by mines.

Children living in these areas are particularly vulnerable to landmines. For example, in Afghanistan, children made up 45 percent of the civilian landmine casualties reported in 2014. Children are more likely to die from the injuries sustained in a landmine explosion. Of those maimed children who survive, few will be in a position to receive prostheses that can keep up with their growth. This is where 3D-printed prosthetic limbs can make a big difference.

Programs like 3D PrintAbility, Project Daniel, Cyborg Beast, and Enabling the Future are working to provide affordable and reliable 3D-printed prosthetics in developing countries. Traditionally, creating a prosthesis is a cumbersome process that can take several days. With 3D printing, this process is shortened considerably. The residual limb is scanned, creating a 3D model that can be customized to fit the patient. The prosthetic is then printed in about six hours.

As with many new technologies, there are still several issues to finalize, in terms of testing the prosthetics, making the technology available in areas of need, and training personnel to use the equipment. However, 3D-printed prosthetic limbs are a great example of how technology provides novel ways to improve lives.