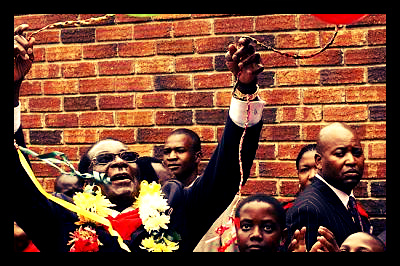 President Robert Mugabe of Zimbabwe released 90 balloons into the air to celebrate his 90th birthday, surrounded by more than 45,000 people including school children, supporters and family. While Mugabe and his supporters were celebrating, the rest of Zimbabwe continued to suffer from economic collapse. Although Mugabe started out much like Nelson Mandela, as a prisoner-turned-freedom fighter, his selfish desire for power led him to become responsible for Africa’s poorest country. After seven terms and 34 years as president, Mugabe celebrates his 90th birthday.

President Mugabe wakes up as early as 4 a.m. to exercise. He prefers not to use equipment, but rather just his body weight – something he learned to make use of after spending 11 years in prison for fighting for Zimbabwe’s liberation. He told BBC News, “In prison we had no equipment, we just had ourselves and that’s what I still do today.”

On his birthday, February 21, Mugabe was in Singapore for eye surgery. Despite rumors, Mugabe’s health appears to be in good condition. When he turned 88, he said, “I have died many times – that’s where I have beaten Christ. Christ died once and resurrected once.”

Mugabe lives next to the Harare Sports Club, allowing him to watch national cricket matches. Mugabe believes cricket is a civil sport that has the power to create gentlemen.

Known to be a bad loser, Mugabe does not like to be interrupted when watching soccer. His wife, Grace, knows to give him space when watching the game because when his favorite team scores, Mugabe will kick and celebrate.

Mugabe prefered British pop star Cliff Richard to Bob Marley when choosing a musician to perform at an independence celebration in 1980. The Zimbabwean president was not keen on Rastafarianism because of the culture of smoking marijuana, drinking alcohol and letting their hair grow into dreadlocks, which Mugabe perceived as messy.

Dressing as a gentleman, in brightly colored shirts and sports caps, Mugabe presents himself with an English style. Before a new stylist joined Mugabe’s team in 2000, his trademark was tailored suits with a matching tie and handkerchief.

In 1957, Kwame Nkrumah led the Gold Coast to independence and it was the first country in sub-Saharan Africa to defeat colonial rule. Mugabe worked in Ghana as a teacher and was inspired by the liberation there.

Mugabe has seven degrees, including two that he received while in prison. He graduated from South Africa’s University of Fort Hare with a bachelor of arts in 1951. He earned degrees in administration, education, science and law by distance learning.

Mugabe and his wife have three children together – the youngest of whom was born in 1997, one year after the couple was married. Mugabe was 73 when his son, Chatunga, was born.

In August, Mugabe won elections for another five-year term. He has been president of Zimbabwe since 1980 and vying to replace him are vice President Joice Mujuru and Justice Minister Emmerson Mnangagwa.

While Mugabe spent the equivalent of one million dollars, the rest of Zimbabwe suffers in extreme poverty. Thousands are without food and water while Mugabe was cutting a 200-pound cake to celebrate his birthday – one of five 200-pounds cakes.