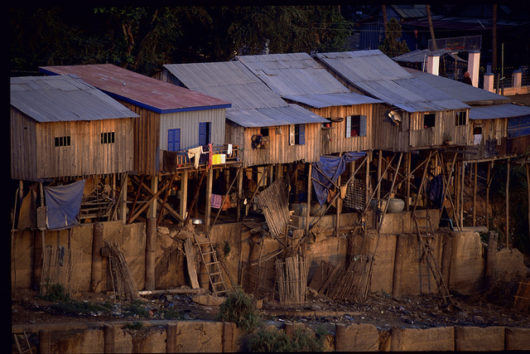 Singapore has enlarged its landmass by almost a quarter its size since its independence in 1965, going from 224 to 277 square miles. Singapore considers reclamation a key strategy for accommodating its growing urban population. In fact, the country has artificially expanded the size of its landmass with sand, thus making the Southeast Asian nation one of the world’s largest sand importers.

After Indonesia, Malaysia and Vietnam grew tired of feeding Singapore’s insatiable appetite for sand; sand mining in Cambodia then took off in 2007 after Indonesia banned sand exports in the same year.

In 2007, the government of Cambodia began granting private companies concessions to mine rivers for sand. From 2007 to 2017, the U.N. reports that Singapore imported more than 72 million tons of sand from Cambodia. In 2015, Cambodia was number even on the top 20 list of sand exporting countries, to the tune of more than $53 million.

A practice called ‘dredging’ sucks up the sand a few feet below the marine floor, disturbing the water. Even temporary increases in turbidity interfere with spawning and suffocate coral reefs. Over-dredging in waterways can lower stream bottoms and disrupt the natural sedimentary processes, leading to the erosion of riverbanks.

Environmental groups report that the dredging industry has threatened several species of endangered dolphins, turtles, otters and mangrove forests. Sand mining in Cambodia has also led to the destruction of Cambodia’s only natural protection against riverbank erosion, rising sea levels, tsunamis and hurricanes.

The connection between sand mining and poverty in Cambodia is seamless. The known dredging concessions were in Koh Kong and Preah Sihanouk provinces on Cambodia’s western shore. Companies did not consult with people in the fishing villages and local authorities did not speak with them before operations began. In the village of Koh Sralau, sand dredging has ravaged the ecosystem that thousands of families depend on for their livelihood.

According to Global Witness, every month in 2010 dredgers extracted more than 850,000 tons of sand from Koh Kong province alone. In 2010, residents of Koh Sralau told Global Witness that the fish catch had declined by 50% since the dredging ships arrived. In 2016, residents of Koh Sralau told the Thomas Reuters Foundations that the sand dredging industry had sent their once-prosperous fishing community into poverty. One man said that before the Vietnamese sand dredgers occupied the area, he could expect to earn $50 a day fishing for crab; alternately, in 2016 he was only seeing $10 and was unable to afford to send his children to school.

Sand mining in Koh Sralau has incurred a wave of displacement. Since the sand dredging began, every family in Koh Sralau has lost a family member, which forces such people to migrate to other places and other countries to find work. People are quite literally losing the land they live on — banks along the rivers in both provinces have become so eroded that people have lost their homes, farms and shops due to landslides.

River Reclamation and Ban on Sand

After years of community organizing and protests by environmental groups, the fishing communities of Cambodia have their rivers back. In July 2017, Cambodia placed a permanent ban on sand for construction and sand mud exports. In addition to this good news for the fishing communities of Koh Kong and Preah Sihanouk, Cambodia will no longer sell sand to Singapore, putting Southeast Asia in a stronger position for environmental and economic sustainability.