The 22nd session of the United Nations Climate Conference announced a new financial investment plan totaling $4 million. The funding will be allocated among eight companies whose entrepreneurial endeavors aim to provide conduits for the development and accessibility of African solar energy.

Presented by the Scaling Off-Grid Energy: Grand Challenge for Development initiative, the investment reflects goals to increase the accessibility of electric power for households and businesses in Sub-Saharan Africa. The U.S. Agency for International Development (USAID), Power Africa, the U.K.’s Department for International Development (DFID) and the Shell Foundation collaborated to found the off-grid energy plan in June 2016. The plan has since become a $36 million initiative with hopes to establish 20 million new conduits for electricity.

Established as a program through the Power Africa initiative, private and public sector collaborators have committed $52 billion to African solar energy development, while over $40 billion in investments are from private sector associates.

According to USAID, 600 million people living in Sub-Saharan Africa live without access to electricity. The ability to utilize such resources is pivotal to an individual’s ability to engage in the global economy and impedes the ability of families to consume modern fuels.

USAID emphasizes that sustainable energy efforts will “improve payment and distribution processes”, while also being more cost-efficient for customers of African businesses. Product development goals range from modern technology – such as software that allows for eased methods of payment for electricity use – to the production of “pay-as-you-go” household solar tools. Companies like Village Energy are also establishing training facilities for young men and women to become technicians and manage retail shops to facilitate the development of rural service networks. 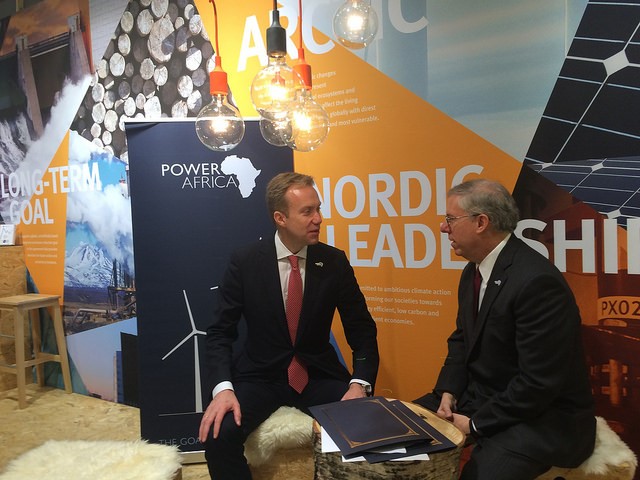 Most people think of food, medicine, and clean drinking water when posed with questions about how to help the poor. But does electricity ever come to mind as a primary tool to reduce poverty? If not, it most definitely should.

Approximately 1.3 billion people are currently without electricity in the world. Such a staggering number seems so hard to believe considering that electricity is always a flick away from those in the U.S. Without the proper access to energy, people are left with inadequate, and often harmful cooking techniques, poor education and health facilities, and narrow opportunities for work and business. The lack of such elements so vital to a healthy life further exacerbates and perpetuates poverty.

More than 3 billion people around the world rely on insufficient cooking fuels to cook meals because they lack access to energy. Most use a variety of harmful solids to fuel their cooking needs, some of which include animal excrement, agricultural residues, and wood. These fuels are also used to provide warmth and lighting, making them even more pervasive and harmful to the individuals using them.

Providing worldwide electricity by the year 2030 requires an estimated $641 billion. There are a number of programs and organizations working toward ending the energy deficit across the globe. Underdeveloped countries in places like Africa and South Asia, as well as low-income urban areas, need modern energy. This need will only continue to grow as urban areas experience influx in the years to come.

ABB (Power and Productivity for a Better World) is a globally active leader that launched an Access to Electricity program in 1999. With India and Tanzania as its focus, ABB has worked with the local governments of those countries to create a system where power can be distributed. Even the slightest access to power can make a world of difference for the local households and farms in these rural areas. ABB has seen tremendous improvements arising from these projects, including increased productivity, higher income, more efficient medical service delivery, and more time for children to study.

Recognizing that extreme poverty cannot end without supplying those in need with modern energy access has come further into the forefront of the U.S. political agenda. During this last summer President Obama announced the Power Africa Initiative. This initiative would essentially focus on Sub-Saharan Africa, aiming to double the area’s access to electricity by strengthening its power in gas and oil. The Power Africa Initiative would provide at least 20 million households and businesses with increased access to electricity.

A mere 15 percent of the population in Africa currently has access to electricity. The Power Africa bill would radically aid a large portion of the continent, and undoubtedly serve as a mile-marker in the fight to end poverty. The initiative needs support both nationally and internationally. Continual political support is key to seeing the mission of the Power Africa Initiative through to completion, thus moving the world that much closer to ending extreme poverty.