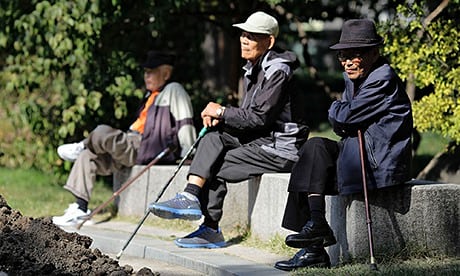 While in many poor countries poverty disproportionately affects the young, the opposite is true for South Korea. After the Korean war of the 1950s, South Korea saw a period of extreme poverty, followed by a fifty-year rise to economic power. And while this rise was good news for most of the country, it also meant that the bulk of all poverty in South Korea was pushed onto its elderly population, with nearly half of all citizens over the age of 65 living in poverty.

One reason for this has been what many people have called South Korea’s cut-throat nature. Known for its ruthless competition over test scores and prestigious jobs, South Korea’s population has accumulated wealth at such a fast pace that social mores have struggled to keep up with the pace of change. In much of Asia, it has long been a tradition to honor and care for elderly relatives as part of a Confucian social contract. However, as the country’s young population has migrated to cities, away from the family unit, expectations have drastically changed. In just the past fifteen years, the percentage of young South Koreans who believe they should care for their parents has plummeted from 90 percent to 37 percent.

In the absence of this social expectation, there exists little to no government program to take its place. South Korea was ranked second-to-last in the Organization for Economic Cooperation and Development (OECD) in terms of spending on welfare for the elderly. Only a third of the elderly population receives a pension, and the pension itself makes for a threadbare living at best. Many people do not even attempt to receive the government pension out of embarrassment, since, to be eligible, an applicant has to prove that his or her children are unwilling or incapable of providing support.

Elderly and Poverty in South Korea

In 2012, South Korea enacted an ill-conceived way to improve the situation, called the “National Happiness Pension,” which only slightly raised pensions, and only for the poorest 70 percent of seniors. Addressing elderly poverty is, sadly, still not a first priority for the South Korean government, which has widespread unemployment and a tumultuous relationship with North Korea to contend with.

Since 2012, however, young South Koreans have begun to recognize the need for action. The Korea Legacy Committee, begun by Mike Kim, an entrepreneur in Seoul and the director of Asia-Pacific partnerships at Google, is dedicated to addressing this issue. Consisting of Kim and eight other Korean entrepreneurs, all working in different fields, the Korea Legacy Committee is tasked with solving this crisis of poverty, first and foremost by raising awareness of the issue. Since 2015, the KLC has held monthly events for their volunteers to interact with elderly pensioners from the Seoul Senior Welfare Center, and quarterly fundraisers, the money from which goes to the senior center’s meal program. So far, the organization has raised more than $20,000.

While South Korea’s elderly population still suffers from poverty and neglect, the rest of the population is slowly coming to terms with the depth of this issue and is finding ways to help. This will be the first step in solving this crisis. Though the end to poverty in South Korea is within sight, there is still a long way to go.