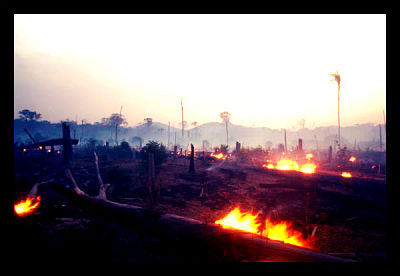 How poverty impacts the environment: Natural resources are being depleted, clean air is growing scarce, climates are shifting, and entire ecosystems are being affected. It doesn’t take long to look around the world and see the ways in which the environment is changing. While mankind, in general, places stress on the environment, poverty in particular has played a major role in environmental degradation across the world.

One of the biggest ways that the environment is affected by poverty is through deforestation. Forests provide the world with clean air, in addition to working as “sink holes” that help reduce the drastic climate changes seen in the world today. With the increasing level of deforestation taking place, the environment is taking a heavy blow and finding it difficult to recover. Impoverished communities, unaware of the errant, harmful ways in which they use natural resources, such as forest wood and soil, are continuing the destructive cycle that spirals the environment further downward.

Air pollution is another way in which poverty contributes to environmental degradation. As mentioned above, poor communities lack the proper knowledge when it comes to production techniques. Thus, the ways in which they use resources to help them survive are harmful to the resources around them, and ultimately the world at large. Air pollution is one of the major consequences of poor production techniques while water pollution is a result of poor water management, once again due to lack of knowledge. Water pollution affects so many things beyond the poor community itself. Water pollution deprives soil of nourishing elements, kills off fish, and is extremely harmful to human health.

Because extreme poverty doesn’t always lend to widespread birth education, many poor women lack the resources necessary to engage in birth control. Therefore, it is common for poor women to continue having children well after they would have liked because of little to no access to resources and education.

Poor regions need to know what the proper and harmless methods are in which they can dispose of their waste. They must learn how to tend a healthy and sound agricultural system without the reliance on degraded soil, and other unfit resources. There must be more importance placed on water management and protecting fisheries, as those are essential for the livelihood of many people. Re-forestation projects are crucial in replenishing the supply of environmental “goods” that deforestation has destroyed.

In addition, taking action to stop the rampage of deforestation is even more important in order to begin to nourish the environment back to good health.