Tag Archive for: Portugal and decriminalization of drugs 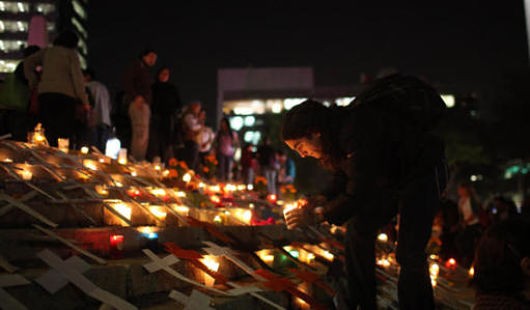 The wars between rival cartels and the government in Mexico have caused tens of thousands of lives to be lost over the past 15 years. Many of these people have been bystanders or activists aiming to end the corruption and destruction of the country by narco-terrorism. Last year, outrage was sparked by a specific incident in which 43 Mexican students were kidnapped and killed by a Mexican cartel. The incredible levels of violence are a curse on Mexicans, who are simply trying to live their lives, and even more so to the poor. Unfortunately, Mexico is not the only example of the “war on drugs” gone wrong, with the hurting of the population it is suppose to aid.

The drug war has been a spectacular international failure; it simply has not worked and instead, has made things worse for almost all parties involved. This shouldn’t be a surprise, the prohibition of alcohol in the 20th century created conditions similar those in Mexico today, with soaring violence and no evidence that the supply of narcotics in the market has decreased.

The poor bear the burden of the failures of policymakers. Instead of using money to help expand programs to help the poor, billions are poured into drug law enforcement programs in developing nations at the behest of developed nations. These billions of dollars are wasted playing wack-a-mole with the suppliers of these illicit drugs without actual progress. For example, Columbia spends $35 billion on drug law enforcement and yet, it is still associated with cocaine as it has in the past. Essentially, $35 billion has been thrown down the drain instead of helping those in greatest need.

The poor in the United States are also hurt extensively by the drug war policies. The United States imprisons about 1 of every 100 adults as a direct result of the drug war. The people imprisoned then face extraordinary difficulty with job searches once released, and stay trapped in poverty. This costs taxpayers even more money that could be spent, instead, on the “war on poverty.”

Together, poverty and the war on drugs have become a vicious cycle. The narcotics industry has become extremely lucrative due to its illicit nature. This has attracted many impoverished people to pursue a career in the narcotics black market because many feel they have a better chance in there than in the regular labor market. Then, after being caught and marked as criminals, they have nowhere to go but back into the black market because regular work is often no longer an option. In turn, this brings more drugs and violence into poor neighborhoods.

Through a variety of means, pushing drugs underground has clearly had an effect on the poor in all parts of the world, from South America to inner cities of the United States. By ending the war on drugs and decriminalizing and/or legalizing drugs, the adverse effects on the poor and the rest of the population could be eliminated.

Portugal had huge problems with drugs until they decided to decriminalize all drugs. The results of this policy experiment were profound. Drug use was cut in half, among other positive results. In Washington State, the legalization of marijuana resulted in $70 million dollars in tax revenue. This doesn’t even include the hidden savings resulting in not enforcing nonsense drug prohibition and the judicial and prison costs also saved.

People endorse drug prohibition because they don’t want to see overdoses, addiction and crimes related to drug usage. Sadly, the evidence shows that drug prohibition seems to be a driving force behind all three undesirables. The drug war also hurts those living in poverty across the globe through cartel and gang-related violence (that would not occur if it was not on the black market), wasted government resources, and a focus on punishing addicts rather than re-introducing them into society. To help the poor and the addicts, increase government efficiency, and decrease tens of thousands of needless deaths—end the war on drugs. A quick look at the simple facts and the history of prohibition shows that the war on drugs is a regressive policy that doesn’t work. It’s time to reconsider.