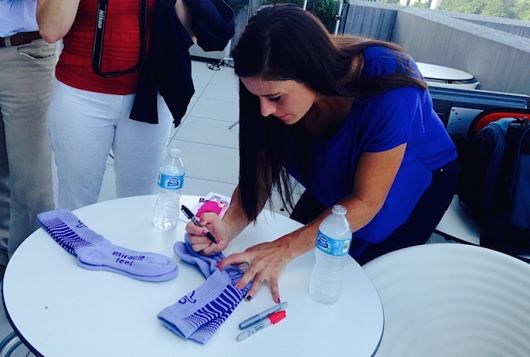 The sports buzz of the past few weeks has surrounded the U.S. Women’s World Cup team as they brought home the title of world champions. Amidst the attention and celebrations, some of the women are doing more than just playing soccer.

Goalie Hope Solo works with a variety of sports foundations and children hospital efforts. Players Ashlyn Harris, Ali Krieger, Abby Wambach, Alex Morgan, Tobin Heath, Christine Press and Megan Rapinoe advocate for the organization To Write Love on Her Arms: an organization that addresses depression, addiction, self-harm and suicide in our society. Midfielder Megan Rapinoe uses her platform for equality and human rights with groups such as HRC and GLSEN.

However, Ali Krieger, defender and midfielder for the U.S. Women’s National Team and Washington Spirit, has specifically paired up with MiracleFeet, an organization that “increases access to proper treatment for children born with clubfoot in developing countries.” Over the course of just five years, the organization has helped provide treatment for more than 10,000 children in 13 various countries.

Clubfoot is a distortion of the foot that is twisted so that the sole cannot properly be placed on the ground. With over 1 million children around the world currently living with untreated clubfoot, it is one of the most common birth defects worldwide. MiracleFeet is directly tackling this serious, but treatable concern for children.

In places such as the United States and Europe, clubfoot is detected before birth via ultrasounds and can be treated promptly after birth, allowing children to continue on with active lives. Mia Hamm and Troy Aikman are among many professional athletes that were born with clubfoot. Their active and successful lives are proof of the worthiness of treatment.

The good news is that a child in a developing country with clubfoot can be completely treated through MiracleFeet for just $250. While so many issues in our world are unsolvable or out of reach, treating clubfoot is neither of those.

The process to correct clubfoot is known as the Ponseti method. Plaster casts are applied to the child’s feet for four to six weeks and are changed weekly to ensure proper and swift treatment. Over the next several years, a brace is worn at night to prevent relapsing. This simple and inexpensive treatment for children changes their lives forever.

When asked why she has partnered with the organization, Krieger responded that “People need people in this world… With MiracleFeet, every kid has the chance to walk, to run or even one day play soccer.”

By promoting it on her website and through videos describing what MiracleFeet does for children and why she has partnered with them, Ali Krieger has spread the word of this need and cause to people around the world.

“Giving this opportunity to them, it’s something that people should cherish and take a part of.” MiracleFeet is not just correcting clubfoot; it’s rewriting the stories of countless lives.