Tag Archive for: plastic for change 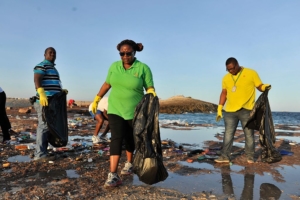 Usually, the highest rates of plastic waste are correlated with areas highest in poverty. In fact, 80 percent of ocean plastic comes from areas of high poverty. What if there was a way to use plastic for change to clean up the ocean, and in doing so, lift people out of poverty?

Solutions to the Plastic Problem

This is the very motivation behind the Plastic Bank. Founded in 2013 by David Katz and Shaun Frankson, Plastic Bank is a nonprofit that pays people in poverty-stricken areas to pick up ocean trash. The organization pays these individuals a digital income in order to monitor corruption and ensure accuracy. Plastic Bank also throws in benefits including school tuition, cooking oil and more for people in these countries.

So far the organization has completed one major project in the Philippines, employing fishermen for $2.50 an hour (nearly double the average wage in the Philippines) who were able to remove three tons of waste as a result. Plastic Bank is working in Haiti and Indonesia to do projects of the same, or greater, magnitude.

Not only is this method far cheaper and more effective than government-run programs, but it is also teaching local communities who are often most directly affected by pollution, the importance of recycling and the proper way to go about it. In many countries like the Philippines or Haiti, survival trumps recycling etiquette, and therefore trash accumulates in the streets and waters. This contaminates the water sources, creating large numbers of people without access to clean drinking water. In Haiti, 75 percent of the population lacks access to this basic necessity.

Plastic Bank is transforming the way plastic is seen. The organization wants to help people realize the value of plastic and how we can use plastic for change. By educating individuals about the uses of plastic, they learn to view it as precious — a kind of currency almost.

Plastic Bank uses the recycled plastic to make what they dub, “social plastic,” plastic that other companies can use knowing they have helped people out of life in extreme poverty. Companies like Dell are using plastic in pellet form to make products such as computers and other electronics.

Going Above and Beyond

Other organizations have headed up similar efforts, including The Bounty Network, which recently completed a clean-up project in the Philippines, specifically in Manila Bay. Working with Filipino locals, the organization cleaned up nearly three tons of trash. Project participants were paid in both cryptocurrency and knowledge — having learned about the importance of caring for the earth.

This new trend of cleaning oceans by empowering disenfranchised people to make a difference is a win-win solution. With a steady income, people in countries like Haiti and the Philippines can overcome poverty, and with clean oceans, they can have safer, healthier environments that could even become good sources of food.